Alabama State Troopers confirmed to News 5 that an arrest was made in a Saturday morning
crash that injured a motorcyclist and dragged his chopper nearly two milesnorth of the
impact site on Highway 43.  Officials say 34-year-old Charles Smith was arrested at his
home Saturday and charged with leaving the scene of an accident with injuries.

PD looking through the nearby area, were able to locate the vehicle and interview the

driver,” said ALEA Captain John Malone.  “Other charges may be pending as the

investigation continues.”  Family members identified the victim of this crash as

were told the suspect tried to hide his car with a tarp.  Mrs. Sanderson said her

broken bones and road rash.  While he is in a lot of pain, she said her husband

should eventually recover and is being kept in the hospital to avoid infection.

hunting camp in Jackson.  Victoria Sanderson said she saw her husband’s shoes on

the road and knew something was wrong.

“It just kept going through my head, God not now, please don’t take him from me now.

At that point I didn’t know until I got to him whether he was alive or dead,” said Victoria

Sanderson in a phone call from USA Medical Center.  Even though the bike was dragged

for nearly two miles, the victim was conscious and alert at the scene.

“Some call it luck, I call it God’s Grace you know, I think it’s both, I think he’s very lucky

and the Lord just reached down and wrapped him up,” said Victoria Sanderson.

More on this Topic:  http://screamingthunder.com/motorcycle-dragged/ 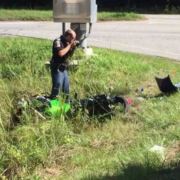 Motorcycle Dragged More Than A Mile After Collision
0 replies