The Moonshine Lunch Run isn’t your typical gathering of motorcycle riders. For starters, it

happens in the middle of nowhere: Moonshine, Illinois, population 2. It happens at a place

that’s hard to find: unless you have the coordinates, GPS won’t get you to Moonshine. It

happens in early spring when the weather is usually cold or wet, and often both. It’s never been

and never will be a commercial event, so there are no sponsors to promote its existence.

of miles – to be in the company of other people who like to do the same. And, in keeping with

tradition, they have a hamburger. That’s about it.

So how did this one–of–kind annual rider gathering get started? Riders can thank a one−of−a−kind long

distance rider named Terry Hammond. Terry was a farmer from Casey, Illinois, who loved to rack up

miles on a motorcycle. “When I’m riding around for 16 hours a day on a tractor,” Terry said, “I’m

dreaming of where I’m going to go on a motorcycle.”

Back in 2004, Terry was looking ahead to spring planting and feeling a little down. Once farming

started, motorcycling would end for him. The camaraderie with other riders he loved so much would

have to wait until summer. But all those hours on a tractor gave him time to think, and Terry got an idea.

He posted an invitation on a rider forum. If any riders cared to join him for lunch – in rural southeastern

Illinois, in early spring – he was buying. His local friends thought the idea was crazy, but Terry knew there

were riders who would “get it.”

Jerry Wagner of Morganfield, Kentucky, was the first. He rode all the way from Kentucky. He went down

half the gravel roads in Clark County before he finally found the place Terry wanted to meet, Moonshine

Store. Jerry fessed up to Terry about getting lost. They shared a laugh, and then they got acquainted over

In 2005, Terry sent out the same invitation and more than 30 riders from 6 states showed up. The next year

more than 400 riders from over a dozen states showed up. Year after year, word spread and the numbers grew.

understand. One year, on the day before Moonshine, Terry received an email from a guy asking him to

reschedule the event since the weather was so cold and wet. Terry replied that he would, but he didn’t know what

he would tell the 300 riders who already arrived from 29 states including Maine, Wisconsin, Florida, Arizona….

People who ride to Moonshine meet other riders who come on every kind of motorcycle out there. They see old

friends and remember good times. They make friends and create new memories. Some sleep in tents, others in

motel rooms. CMA Chapter #836 provides a “Blessing of the Bikes” and the people who ride them. Some riders

enjoy an elephant ear sandwich, a sweet roll or two (or three), or a bowl of chili. All of them enjoy a Moonburger.

Moonshine isn’t a competition, but there are some records out there. In 2008, Pete Rogers from Oasis, British

Columbia, rode 2,196 miles for a Moonburger, so far the longest distance ridden to Moonshine. (Here is a picture

beautiful sunny day. Those are all records, too.

Terry conceived of the Moonshine Lunch Run as a fun event to bring riders together. Through his generous

example, it also became a way of supporting worthy causes. Each year, participants donate many thousands of

community services. This giving spirit continues the tradition that Terry started and that makes Moonshine 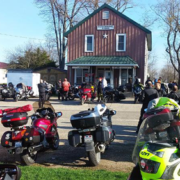 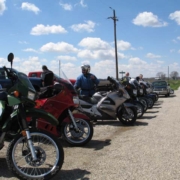