All eyes were on Indian heading into the season opener after assembling a team featuring three of the sport’s most decorated riders and armed with Indian’s Scout FTR750. The season-opening victory brought dramatic validation to Indian’s bold re-entry into the sport it had once dominated, reigniting the Indian Motorcycle versus Harley-Davidson rivalry that had carried the sport throughout its glory days. 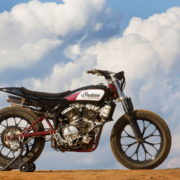