burst into flames. Witnesses described how hero passers-by stopped their cars to help after seeing the

man on the ground near the crashed vehicle.

The motorbike and car collided with each other on Lees Street, near Middleton Junction ,

on Tuesday morning. Pictures from the scene show huge plumes of smoke billowing from the fire in the

aftermath of the smash.

The 58-year-old biker was conscious and breathing, and was taken to hospital with injuries to his arms and legs.

One of the heroes, Paul Stokes, who stopped in his car to help two other passers-by pulls biker to safety.

Recalling the incident, the 45-year-old from Heywood , said: “I was in the car driving with my 11-year-old

daughter when I saw the motorbike on fire. 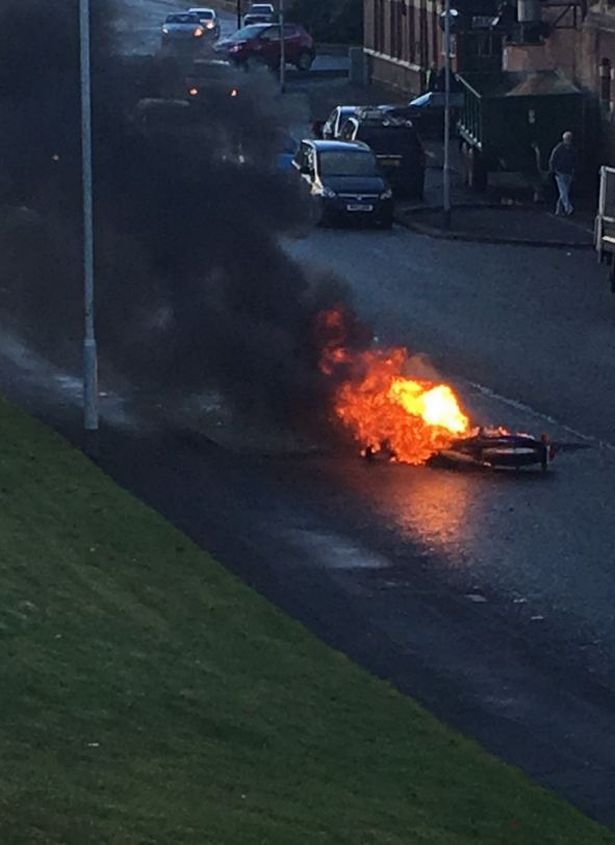 “I pulled up and ran over. I told everybody to get out onto the other side of the street.

“There were a couple of people with him and he was about eight feet away from the bike.

“I went to help them move him to the other side of the road. I was mostly conscious that we needed to get him

away from the fire. “It’s good to see people help in a dangerous situation. I didn’t really think about it – it was

just a natural reaction. “The fire was raging, there was lots of smoke. We brought him to safety. It’s what

anybody should do.” Des Thorpe, owner of HT Tooling Solutions, was at work when he saw the fire from his