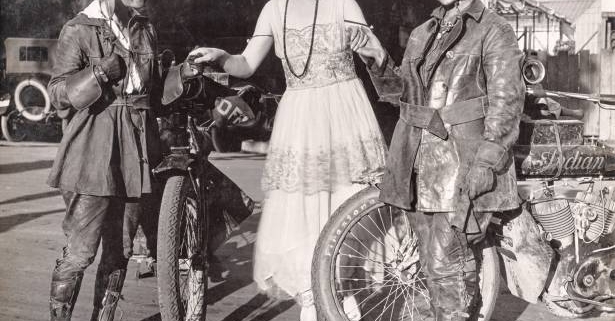 A hundred years ago, there was one relatively efficient way of crossing the country: by rail.

To do it by road required using a patchwork of mostly unimproved surfaces — dirt, gravel, and sometimes just sand —

on motorized vehicles that were still in their infancy and often unreliable.

But in a journey that was partly a push to advocate for greater independence for women, two sisters, riding motorcycles

made in Springfield, took a 5,500-mile, coast-to-coast trip in 1916 — First Cross-Country Motorcycle Trip By Women.

Augusta and Adeline Van Buren, who traced their lineage back to the days when New York was known as New Amsterdam,

braved sandstorms and downpours, desert tracks and overheated engines, and small-town residents scandalized by their clothing:

trousers and leather jackets, rather than dresses and corsets.

A small but lively exhibit at the Springfield Museums, “Crossing the Country to Cross Barriers,” chronicles that epic journey

with period photographs, news articles and old equipment, like the leather headgear the sisters wore in the days before helmets.

It’s a trip that also inspired a re-creation of the ride last summer, when motorcyclists — including some of the sisters’ descendants —

followed much of the original route, from New York to California.

“They were smart, they were good looking, they were independent, and they had played every sport imaginable,” said Robert E.

Van Buren, a great-nephew of the two sisters; he learned of their adventures when he was growing up in New York City, though he

“Nothing bothered them,” he added. “They were always up for a challenge, and no one was going to tell them they couldn’t do something.”

Van Buren, who just turned 71 and lives in Northborough, east of Worcester, co-curated the Springfield show with a cousin,

Dan Ruderman, of Great Barrington. Van Buren’s father, Albert, was the son of another Albert, the brother of Augusta and Adeline.

Robert Van Buren, along with his wife, Rhonda, and their daughter, Sarah, retraced his great-aunts’ route last year by motorcycle,

along with close to 100 other riders; he was able to pose for photographs at some of the same locations at which Augusta and

Adeline had their pictures taken, such as by a waterfall in Colorado Springs, CO.

He and his wife also did a 90th anniversary motorcycle ride, in 2006, to honor the memory of his great-aunts epic First Cross-Country Motorcycle Trip By Women; Adeline died in 1949

“To make that trip today is a heck of lot easier,” he said. “When they did it, the roads were terrible, and west of the Mississippi,

there weren’t even any maps … they were really roughing it.”

Police Have Identified Motorcyclist Who Died In 3-Vehicle Crash On Route 30...