Blog - Latest News
You are here: Home1 / News2 / Emile Leray Built A Motorbike From A Citroen To Escape Death In The De... 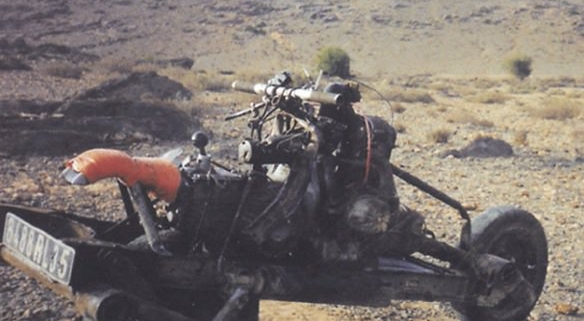 Heading into the great unknown, with the wind in your hair and the sun shining high sounds like a great holiday, but when
Emile Leray ventured into the Moroccan desert around 20 years ago, he found out that the desert could be an unforgiving place.
This 43 year old Frenchman had taken his Citroen 2CV and wanted to go on an adventure, crossing the Moroccan desert from the
city of Tan Tan.

What happened was that he passed a military outpost that informed him that he would be unable to continue further down the road
due to unrest and conflict in Tilemsem and beyond. He was told to take a passenger back with him and as he wanted to avoid doing that,

he quickly sped away, driving off road to get away from the officials.

However, as most plans, this went a little awry and Emile soon found himself stranded in that desolate place, with no help in sight
after he went off road and crashed his car. As anyone will tell you, being in the middle of nowhere is not the best place to be stranded
and Emile realized that he had to somehow get out of there – and soon.

Having enough food and water for ten days, he knew he wouldn’t last long if just sat in his car and waited for help to arrive.

He knew he couldn’t make it out of the desert on foot as the nearest human settlement was 20 miles away so he set out to do what any
self respecting mechanic would do. He decided to build a motorbike from his crashed car! His amazing escape from the barren landscape
and his amazing ingenuity has placed him firmly in the history books as being the most ‘extreme’ mechanic in the world.

He was a former electrician who found his solo adventure was cut short after his car crashed in the desert. His practical mind calculated
that it was pointless staying put looking for help so after going through his options, he decided to create his own motorcycle from the
crashed car. This story seems like a page taken out the fictitious story of Marvel’s Tony Stark aka Iron Man, but this is even better
than fiction because this story is absolutely true.

With a broken wheel axle as well as a broken swing arm, he knew his car was kaput. Being the whiz mechanic he is, he decided to start
building a motorcycle, and even better, he captured his creative process so that years later, we all can be witnesses to his ingenuity.

After formulating what all he needed to do, he made his DIY motorbike early the next morning. 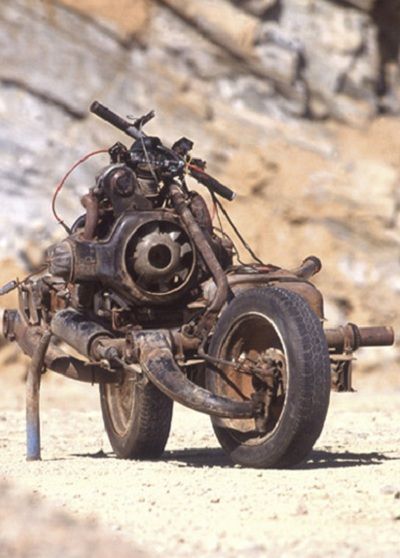 The scorching sun did nothing to help him; neither did the stinging sandstorms that hit his makeshift garage. He used the body of his
Citroen to give him shelter at night and during the sandstorms.

The car’s rear bumper was converted into a seat of some sort and the chassis was shortened as well. Taking out the engine and gearbox,
he placed them in the center, forming the makeshift motorbike around these vital components.

Now this part gets REALLY interesting. The 2CV transmission is what will knock your socks off – the laws of physics makes the DIY
motorbike travel in reverse because of a drum that drives the rear wheel through friction. You must be wondering how on Earth did he
have the tools to create a motorbike from scratch in the middle of the desert?

Well, this man had no power tools to make his life easy, but you know the saying – Necessity is the Mother of invention. He had no
drills to help him and no welding tools that could put all the different parts come together to make a whole. Instead, this DIY two
wheeler was made just by screwing all parts together. To make holes in the metal, Emile bent the metal parts 90 degrees and using a
hacksaw or a round file, he weakened the pieces managing to puncture a hole with the hammer and punch.

As reported to the media on his return, he thought that the creative process would take only three days – but the harsh environment,
coupled with the limited supplies and tools at hand, it took him 12 days. Those 12 days definitely saw him really sweating it out, as
he pushed hard to craft his creation.

On the last day, he had only half a liter of water left with him – rationing his supplies couldn’t
have been easy, especially when he was surrounded by extreme temperatures. Even the hard effort of building his motorbike would have
built his appetite, but he had to watch how much he ate as the food had to last.

His newly crafted motorbike worked and he successfully navigated his way to civilization, but his luck took him to the Moroccan
police who took him in. Fortunately, they accompanied him to the nearest town and he was safe back in civilization, but he was also
handed a big fine. Why? He had placed his car’s licence plate on his makeshift bike, but the registration papers of his car described
a vehicle that did not resemble the one he was driving even remotely.