Blog - Latest News
You are here: Home1 / News2 / Veterans question the decision by Deadpool 2 producers to give the green...

light for the motorcycle scene to SJ Harris, a professional racer,

rather than a more experienced film pro: “It absolutely could

Hollywood stunt performers are, by and large, united in their desire for film and television sets to be as safe

as possible. They earn their keep by testing the limits in dangerous and often uncontrollable settings.

But their insistence on this point also may explain why, in the wake of the tragic accident on the Vancouver set

of Deadpool 2, in which a 40-year-old professional motorcycle rider named Joi “SJ” Harris was killed, they have

“She was a highly qualified motorcyclist racer but not an experienced stunt person,” says Conrad Palmisano, a

veteran stunt coordinator and second unit director with 47 years in the entertainment industry, including credits

on Sleepless in Seattle, 21 Jump Street and scores of other productions. Palmisano expresses concerns about

Harris’ racing background and how it would prepare her for this particular stunt. “It is my understanding that

she is reported to be a pro racer,” he says. “But she rode 300cc cycles. The one she crashed on was 900cc motorcycle

Harris hailed from New York and was widely lauded for becoming one of the country’s first and most successful black,

female motorcycle riders. She was featured in a 2015 profile in Black Girls Ride magazine. Her social media feeds were

paeans to the world of motorcycle riding, and her role in bringing that culture to a wider, more diverse audience had

The Deadpool 2 production was her very first job on a movie set. Several stunt people say her skills on the racetrack

notwithstanding, the stunt work on Monday called for a professional stunt worker. Harris, they worry, was given the

job less due to her professional riding chops and more because as a body double, her skin tone was a closer match with

actress Zazie Beetz, who plays Domino in the film.

Through a third party, a member of the Deadpool 2 crew in Vancouver backs up the assertion that producers chose Harris

largely for this reason. In the wake of the accident, producer and co-writer Rhett Reese said in a statement, “[We] feel what

our entire crew feels: shock and sadness. Our hearts break for SJ’s family and friends and all she touched.”

professional stunt woman was available. Melissa Stubbs, who has more than 200 IMDb credits and was was Margot Robbie’s

double for motorcycle stunts in Suicide Squad, wasn’t a match but had long experience riding motorcycles on productions.

“She was willing to do the job,” says that stuntperson.

Another stunt industry veteran with knowledge of the production and incident is emphatic about what happened. “It absolutely

could have been prevented,” that person says. “Joi was totally unqualified and never should have been there or put in that position.

” The stunt veteran continues, “Joi had never been in a film or done any sort of stunt. She was just a girl from Brooklyn who liked to

road race — which was not remotely similar to what was required for the shots. She didn’t have the experience or skills for the job

they brought her in for.”

Other stunt insiders reached for comment agree with that sentiment. “I do tons of NASCAR stuff, and I have hired real NASCAR

drivers to do work and they end up wrecking the cars,” says Steve Kelso, a member of the Stuntmen’s Association, a 40-year veteran

of the film and TV industry who has worked on hundreds of productions from the Fast and the Furious pics to Beverly Hills Cop. “I

can’t tell you how much different it is doing stunts with motorcycles than just riding where the aim is to go really, really fast. I’m a

motorcycle rider is only half the job, the other half is knowing all the parameters and the art of making movies.”

Kelso explains that professional racers, car and motorcycle alike, spend their careers learning how to avoid crashing. The goal is to

stay upright and make it over the finish line. Stunt workers, by contrast, evolve professionally in a world where the end point is very

often — and very deliberately — a wreck. Thus, they learn how to fall, how to let go, how to abandon a stunt before it has become too

before proceeding with the live shot. That’s good, says Kelso, however it’s when one detail goes wrong that the difference between a

“One is about knowing when to fall off because you’ve lost the bike, or when to stop because you screwed up from the beginning,”

he says. “She appears to have been a capable rider, but it just turned into a terrible, terrible accident.” 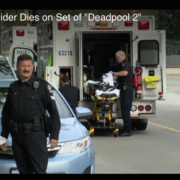