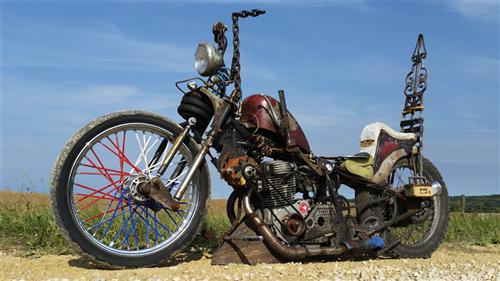 Originality is what makes us who we are. The feeling of being lost within my imagination, leaving my perfectionist side on the bench is what pushed me to building the Flying Tit. With it being the first bike I’ve built, it started out as a basic bobber project. I took a sharp turn one day and decided to go against the grain of what is around my area, Davenport, Ia. As I started to piece things together I ran into normal issues along the way, so I became solution oriented, with a touch of creativity.

For example, a common issue in these older bikes is the poor charging systems.  After I rewired the entire system and even installed a r-292 car regulator, it worked for a couple weeks but proceeded to fail. I dug deep for a solution and came up with the small block Chevy alternator. After much thought, I hand made a block off plate, since this is originally an oil bathed charging system and cut a groove into the original charging rotor for a v-belt. With having a built in rectifier and regulator, the alternator monitors and maintains the small motorcycle battery quite well, 12V is 12V!! I later on discovered what was a great idea to me (just got into bikes in 2012), was already being done back in the day on pans and shovels! Kinda cool! 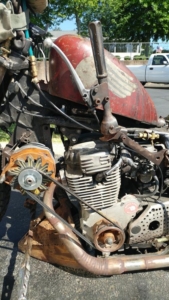 The front end is probably throwing you off a bit at first glance or your probably wondering how in the world did that pile of rust move with the frame laying on the ground!?? It’s a design from my imagination, what I call an air bagged vertically 4-link. I was inspired by Afterhours Bikes and what they had done with their air ride setups and set out to create my own. With air being pumped through the copper air lines from a small 12V compressor stashed in the ammo can, the air bag forces the links to move, raising the frame up off the ground. I installed multiple valves throughout the lines to do various things with the air movement, such as; allowing me to fill and lock the backup air tanks which are the fork tubes, can hook up an air line to fill a tire or the daughter’s soccer ball, and lock the air in the bag while riding. Imagine riding to your destination and parking, manually open a valve and you hear the Ppsss as the bike lays frame… then you simply step off and walk away the the look of confusion on everyones face! 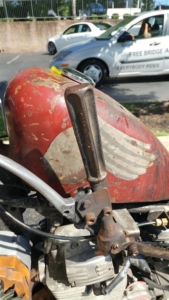 The jockey shift was part of my solution to not buying a longer clutch cable after I made my log chain ape hangers. The shifter was pieced together with part I found at an antique store, Donahue Trading Post. Many parts are antiques that I re purposed to create the look I wanted. Using a spotlight from an old GM police car as my headlight, modifying it to accept a newer style bulb and the aged hunting flashlight carrying the LED taillight.
The ooo sh!t brake that is tucked under the bike was just a wild idea I had and wanted to see if I could make it work, and it did. I took a rear wheel from a pit bike and cut the spokes off. The remaining hub gave me a perfect jack shaft to a disc brake. With it being controlled by the master cylinder next to my right calf, simply squeeze the bike in the moment and it applies a secondary brake.
See More : http://www.bikernet.com/pages/The_Flying_Tit.aspx

Rider Solutions From The Attorney That Rides: FOGGING HELMET VISOR