The sound of their motorcycle exhaust pipes will get your attention, but bikers say they do not want

to cause fear or intimidation.

criminals. They said since the deadly Twin Peaks shooting happened in May of 2015, there has

been a bad stigma attached to their motorcycle clubs.

“We’re totally involved in our community, but you never hear about that. All you hear is about is

the crap when they bust some of the big boys,” Wolverine Motorcycle Club member Mike Drutter said.
More than 100 bikers, including veterans, showed up at Scooters Bar and Grill Sunday in Garland

for a Region 2 Confederation of Clubs and Independents Biker Meetings.

“The COCI was started for righteous reasons. We work legislative issues, and we work charitable

They also discussed biker’s rights, and encouraged bikers to show camaraderie toward one another.

In less than five minutes, they raised $660 in a hat for a biker who is battling health issues. Drutter said

despite negative opinions, they are actually good people.

The latest motorcycle news to hit the state of Texas was the mistrial of Dallas Bandido Jake Carrizal.

Drutter said since the Twin Peaks shooting, motorcycle clubs have been given a bad rap by both police

and the public, and that they are viewed as criminals.

“This whole label of gangs and organized criminal activity is crap. The worst my people do is get arrested

for a speeding ticket every now and then,” Drutter said.

When Moss heard that the Twin peaks trial was a mistrial, he said was elated. He feels the state presented

a weak case and the second trial for Jake Carrizal will have the same outcome.

“Abel Reyna made multiple, multiple blunders along the way. Of course we’re not going to tell him what

they are. I think he’s his own worst enemy,” Moss said. 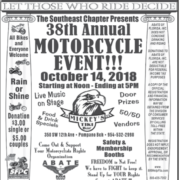 Attorney That Rides: The Motorcycle Injury Attorney
Scroll to top