Blog - Latest News
You are here: Home1 / News2 / Panda Biker Ticketed In Minnesota For Being Unsafe 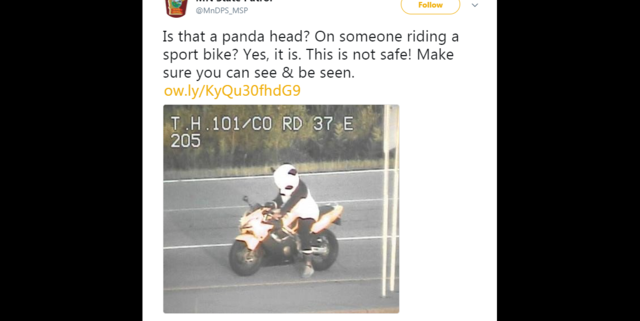 driving after he was stopped by state troopers while dressed as a panda.

Police had been on the lookout for the costumed biker, who was recorded earlier

this summer weaving in and out of traffic on Highway 101 by a concerned motorist.

On that occasion, he exited the highway before police could could locate him.

were able to pull over the driver, who told officers he wanted his riding videos to go

“viral.” Instead, he was ticketed and forced to hand over his panda head.

Police were not entirely amused. On its Facebook page, the Minnesota State Patrol

reminded motorists to “make sure you can see and be seen.”

How-to Restore A Motorcycle With Water Damage
Scroll to top