Blog - Latest News
You are here: Home1 / Lifestyle2 / Lane Splitting In Arizona To Be Banned?

Should Motorcycles Be Allowed Between Lanes

When you’re driving in California, do you like when motorcyclists cut between lanes of traffic?

motorcyclists, some authorities worry it would lead to more crashes.

session, which begins in January. Farnsworth told the Arizona Capitol Times, which first

reported the story, that he’s not “passionate” about it, and that he introduced the bill after a

request by a constituent.

However, Farnsworth told Phoenix New Times that he would become enthusiastic about lane-

splitting if he saw more statistics that showed it was safe.

“I’m reasonably convinced that it will improve safety,” he said, adding that he hopes to see facts

and good debate about the practice in legislative committees next year.

The bill, SB 1007, strikes out the clauses in statute that make lane-splitting, also known as

filtering, illegal. In other words, if the bill became law, it would allow motorcyclists to “overtake

and pass in the same lane occupied by the vehicle being overtaken,” and also would allow

motorcycles to operate “between the lanes of traffic or between adjacent rows of vehicles.”

for lane-splitting alongside other state agencies.

But there is opposition at the capitol.

“We don’t like the idea,” said Alberto Gutier, director of the Arizona Governor’s Office of Highway

lane-splitting for one year as a test, but only in counties with more than 2 million residents. (Which

meant only Maricopa County.) Brewer wrote in a veto letter that she was concerned that some people

didn’t see it as safe, and that one year might not be enough time to educate the public about it.

Lane-splitting has long been tolerated by police in California. The state further formalized the

practice last year with a law that directs the Highway Patrol to develop guidelines for it.

Fatalities related to lane-splitting do sometimes occur in California, though, and it remains a somewhat

controversial issue, though. In 2015, a study by the University of California, Berkeley, found that

filtering is “relatively safe” when performed at speeds under 50 mph.

Still, polls have found that the vast majority of in California don’t like it. 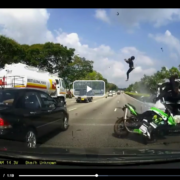 Biker Thrown Into Traffic After Slamming Into Stopped Vehicle
0 replies