Blog - Latest News
You are here: Home1 / Lifestyle2 / A GUIDED MOTORCYCLE TOUR : Is It Worth The Investment?


I’ve often read ride reports on ADV Rider or even here on Common Tread, detailing parts of the continent I’d love to tour on two wheels. I see the signatures on forums where people color in the states (or even countries) where they’ve ridden on a motorcycle. I get very inspired, but also very jealous.

I think to myself, “Someday, maybe when I’ve got enough vacation banked, or maybe when I’m retired, I’ll be able to ride on that side of the country.” That sounds like procrastination, but really, the problem is time.

I’ve always wanted to ride through Joshua Tree National Park. But even though I already live on the left coast (and thus the right time zone), it would still be over 1,000 miles on I-5 just to get there, assuming I’d take the most direct route from the Pacific Northwest, and you can bet that if I were riding down the west coast, it wouldn’t be a straight and efficient shot down I-5. Simply put, I cannot (nor do I want to) burn an entire year’s worth of vacation time on an out and back to Joshua Tree. What I had was just a few days to do with as I pleased. So, I set about figuring out how to buy more time.

Fly and Ride: The Options
The most obvious solution to this problem is to simply fly to Southern California and rent a bike, which is essentially what made Spurgeon’s recent trip to Baja possible. For me, renting a bike from Eagle Rider made the most sense for my itinerary because my plan was to fly into Los Angeles but return home from Las Vegas, and the rental company has locations in both cities.

There’s more than one option. You can rent a motorcycle only, but Eagle Rider now also offers packages that include bike rental and hotel, which are priced exceptionally well at $179 per day, considering that even the least expensive motorcycle is $119 per day (both are plus taxes and fees, sadly). The catch is that, while you get to pick the city of your hotel, you don’t know exactly which hotel it’ll be. It’s a bit like Priceline in that regard, but Eagle Rider guarantees that all the lodgings are motorcycle-friendly.

Then there’s a more structured option. Eagle Rider also offers a tour that comes complete with support vans (with drivers) that carry all your luggage, tools, food, or whatever you’d like. It makes you feel like you’re starring in your own motorcycle trip documentary. The top-tier tour package even comes with your own motorcycle guide for the entire route, as well as a trailer with a spare motorcycle, in case something goes wrong with yours.

For people who have no time for breakdowns to ruin their itineraries, this is the ultimate convenience. Obviously, all this comes at a hefty price, but there are plenty of takers, most of them from countries like Germany and the U.K. Riders from countries with high import tariffs on goods, such as Brazil, often take advantage of the support van by making dedicated shopping stops to buy clothing and electronics. That’s something that’s usually the last thing on my mind when I’m on two wheels. 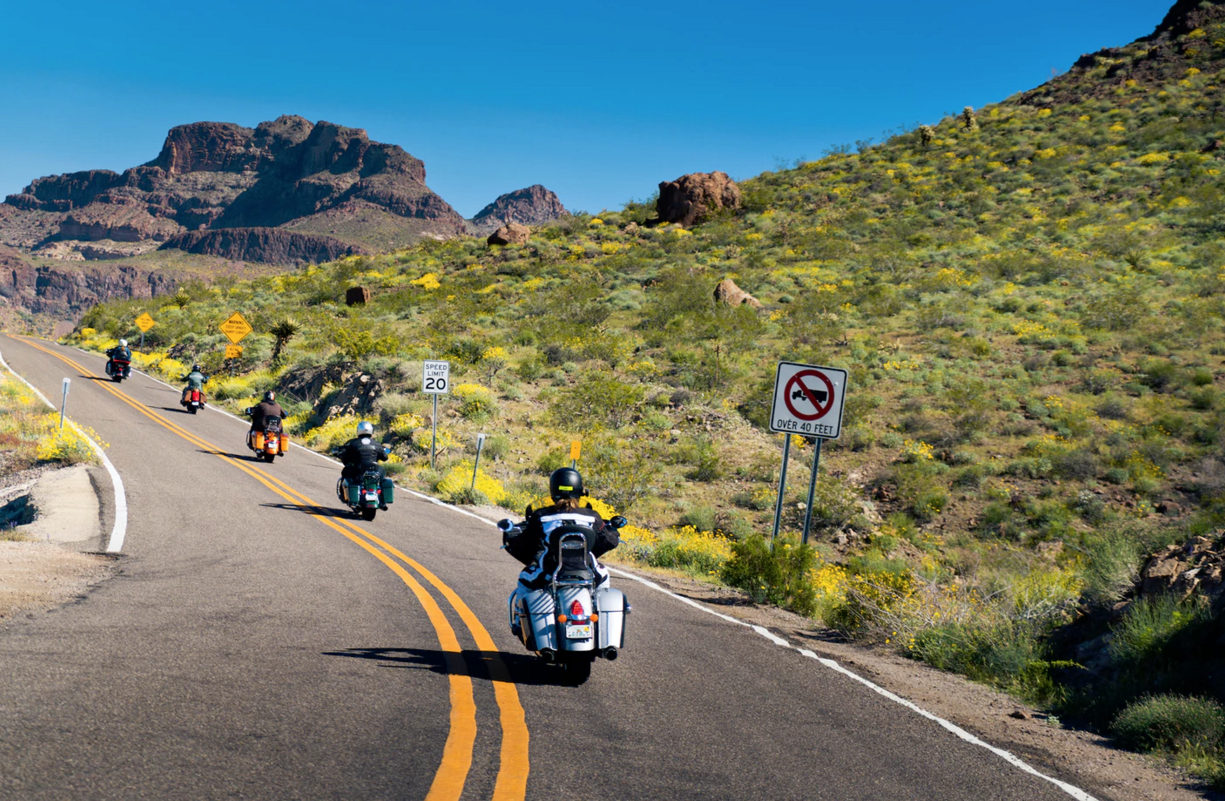 Going Luxe & Trying Something New
While I’d typically opt for the no-frills package, I wanted to try what is most commonly experienced by vacationing riders coming from abroad. Eagle Rider says that around 90 percent of its tour customers are from overseas. So, I joined an abridged Wild West Tour (full Wild West Tours are eight or 16 days) that started in Los Angeles and ended in Las Vegas, with overnight stays in Palm Springs and Laughlin, Nevada. This also meant joining a larger group of riders with the same itinerary. If you’re not a fan of group rides or riding with people you don’t know, then this isn’t for you. If you love making new friends, I was told that many lifelong friendships have developed on these tours.

Eagle Rider’s location in Los Angeles is attached to an Indian Motorcycle dealership. I originally wanted to ride a BMW R 1200 RT, but at the last minute I switched to an Indian Scout that caught my eye with its stunning red paint and natural brown leather seat and saddlebags. I figured that a smaller motorcycle with less protection from the elements would allow me to soak in as much of that Mojave sun as possible before I returned to the dreary gray and wet of the Pacific Northwest.

Ironically and unfortunately, the forecast called for rain on the first day of riding (we planned to hit the backroads to the Temecula Valley wine country), so the guides made the call to hit the interstate to get out of the incoming bad weather. This immediately highlighted the role of the guides, and your opinion may vary. While I wasn’t afraid of the rain, the guides had to consider the preferences and comfort level of the rest of the group. As it turns out, the originally intended roads were experiencing mudslides from all the rain in California this winter, so it was the right decision. Oh well, at least the drought is over.


We hit the interstate to get from palms to pines on the Idyllwild National Forest highway (Hwy 74) for some fun in the twisties with a mid-way stop at Mile High Cafe for lunch, a place that offers a strange intersection — but not fusion — of American, Korean, and Japanese dishes. Orders to the table included kalbi beef ribs, katsu chicken, and a bacon cheeseburger. From there, it was back to the curves on the Banning-Idyllwild Panoramic Highway (Hwy 243) until we were back on the interstate towards Palm Springs, where we’d park the bikes for the night at Palm Mountain Resort. It was my first time in Palm Springs, so I enjoyed the late afternoon arrival that gave me plenty of time to walk around — until the skies opened up and it began to rain.
Day 2: Joshua Tree
The next morning was the start of the day that I was most excited about: Joshua Tree. The rain clouds were gone and the skies were bright blue. Those with open-faced helmets put on sunscreen. Riding through Joshua Tree National Park was an unforgettable experience that’s only held back by the careful attention you have to pay to your speed. The speed limit is 35 mph and that’s easy to exceed because your eyes are looking at the beautiful rock formations in the desert. The place is indescribable — you just have to go. Watch out for the cholla cactus should you decide to go for a walk; those spines will even stick to leather.

Just outside the national park is a family-owned BBQ joint called Rib Co. that is apparently supported by tourists coming from Joshua Tree. Little did I know that I would need all that meat and cornbread to help me get through the seemingly too many miles of straight highway riding in the Mojave sun before arriving at the Colorado River that divides California and Arizona.

The Eagle Rider tour operators saw fit to include a scenic boat ride from Pirate Cove on the river as a break from two-wheeled travel and to enjoy the sunset. From there, kickstands were up again and it was fitting to arrive in Laughlin, Nevada after the sun had set. From far enough away, it looked a little bit like Las Vegas, and the night’s accommodations in the Aquarius Hotel and Casino did its part to mimic it, as well. Typically, those on these tours are cut loose for the night to do as they please, but we were hosted by Guy Fieri’s El Burro Borracho restaurant in Harrah’s. Get the trashcan nachos. 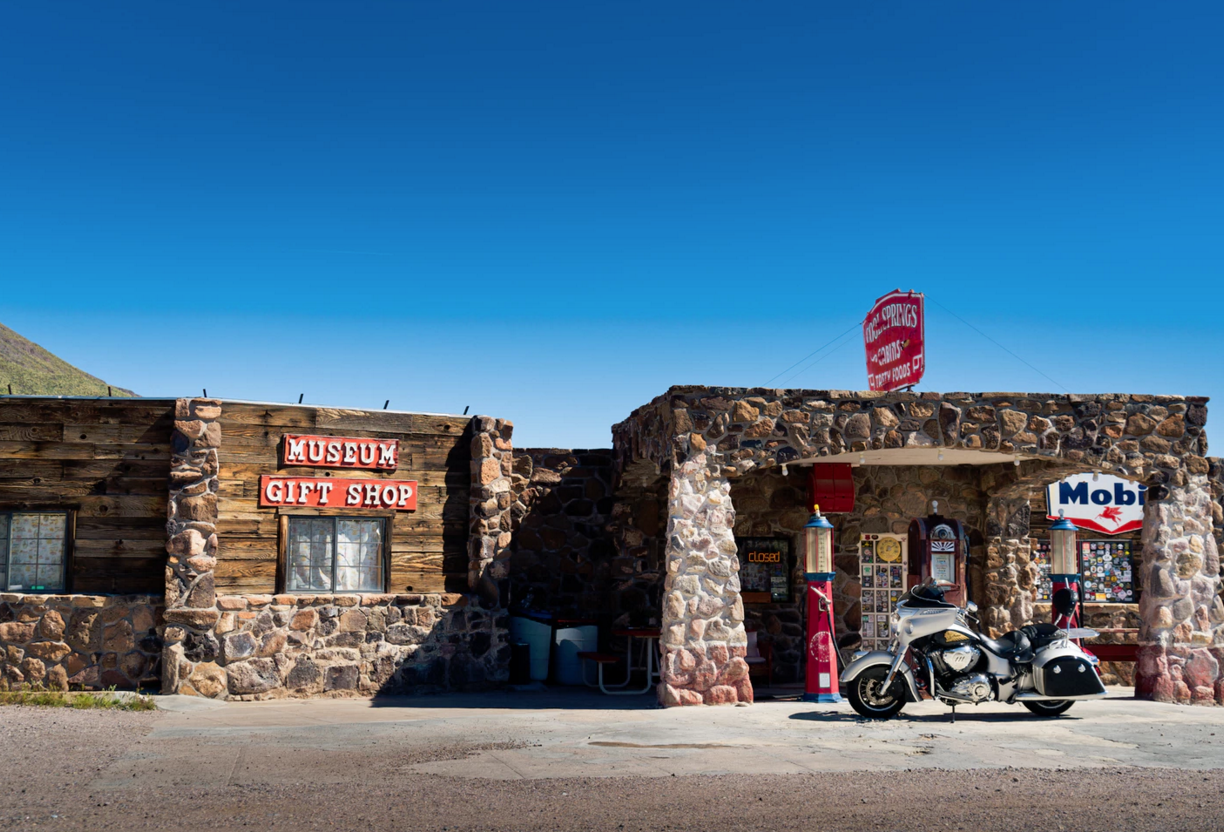 Day 3: The Motorcycle Ride Goes Airborne
Day three would eventually take me to the real American gambling mecca, but not before hitting a couple of iconic stops along the way. Oatman, Arizona, was a once-thriving mining town that’s frozen in time and looks much like it did in the late 1800s, except now it’s frequented by tourists and those doing road trips on Route 66. A Japanese tour group was treated to the scene of motorcycles and sprinter vans pulling into this wild western town. Many photos were taken.

From then, it was up Hwy 93 to see the Hoover Dam, which we ended up skipping due to immense traffic trying to get in. But we didn’t miss out, because the admission price of the tour includes a Papillon helicopter tour of the entire area, not only the Hoover Dam and Lake Mead, but also the Grand Canyon, of course. The trifecta of land, sea, and air on this tour was complete, and it was time to head to the final destination of Las Vegas.

There’s no story of Sin City to tell, as I had to get home that very night. The bike drop off experience at Eagle Rider’s Las Vegas location was exceptionally simple; you park the bike and it gets checked in and reviewed by one of their staff. It was an incredibly easy experience highlighted by my suitcase being unloaded from the support van, where I packed away all my gear before heading to McCarran Airport.

If I had to do it all over again, I would reverse the journey. Eagle Rider’s Las Vegas location has agreements with the local BMW, Moto Guzzi, and Triumph dealerships. This expands the motorcycle choice from mostly Harleys and Indians of the L.A. location to many other types of bikes, including some that are much more affordable for bike-only rentals. A Triumph Bonneville is $79 a day, a Moto Guzzi V7 is $89 a day, and you can even grab a Vespa LX 150 for $59, though you probably won’t be going very far on that. If I could have my pick of the litter, it would be the BMW R 1200 RS, but it does cost a pretty penny at $195 per day. Maybe next time.

The Evel Knievel Museum Is Open