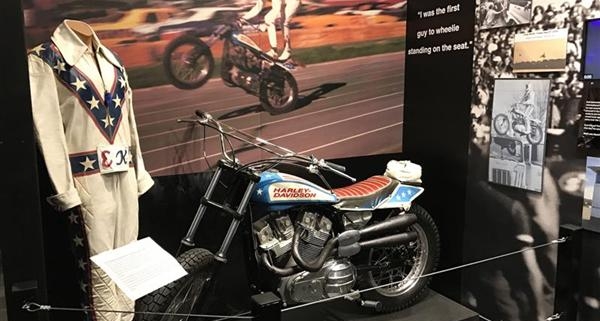 Experience the singular showcase of genuine artifacts belonging to the most legendary, death-defying daredevil of all time. The new Evel Knievel Museum is a world-class facility containing the most complete Evel Knievel collection in the world including actual leathers, helmets, and hidden-cache canes, X-rays showing the metal pins that held Evel together, and rare, never-before-seen jump video and photos.
But that’s just the start. On display are Evel’s own jump bikes—motorcycles that sometimes launched him toward horrific crashes. These include bikes Knievel piloted at Wembley Stadium and Caesar’s Palace featuring their original sheetmetal, painted by Evel’s artist George Sedlak. See the X-2 Sky Cycle launched at Snake River, perched on Evel’s ramp and installed over dirt brought in from the original location. Peek inside “Big Red,” Evel’s traveling rig and dressing room, resplendent in red, white & blue metalflake vinyl in the original stars and stripes motif. 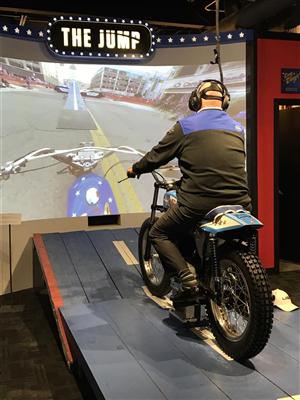 A centerpiece of the collection is the most iconic Bell helmet in the world: the 1966 Bell Star worn by Evel Knievel for the Caesar’s Palace jump—and subsequent crash. Hidden from view for decades, it’s still beautifully battered and likely saved his life that day.

Said Museum Co-Founder Mike Patterson, “Evel was such a riveting figure in the 70’s. He did things no one had ever done. I’ll never forget seeing him jump when I was just four-years-old and he still inspires today’s extreme sports athletes.”
The collection was amassed over four years by actor, producer and entrepreneur Lathan McKay. “It’s been an arduous but magical road,” said McKay. “This museum is the fulfillment of a dream for many people.” He termed the worldwide hunt for Knievel memorabilia, “Evel Archaeology.”

A GUIDED MOTORCYCLE TOUR : Is It Worth The Investment?
Scroll to top