Blog - Latest News
You are here: Home1 / Lifestyle2 / Bluetooth Coms Can Save Your Ass

The only word I could get out of my mouth was “No!” Which was yelled, loudly, into the little microphone inside my helmet, and I presume, echoed equally as loudly inside Kyra’s helmet on the other end.

It was dusk, with only a few, fleeting moments of southern sun on the horizon. We had been riding all day, making our way from New Orleans to Apalachicola, Florida, some 388 miles in total. We were tired. Kyra, unbeknownst to her, was about to pull out in front of large American sedan speeding ever so thoughtlessly through the dim daylight without its headlights on. I somehow saw the thing, or the shadow of a thing, and yelled that two-letter warning at the top of my lungs, just as she was preparing to turn into the driveway which led to that night’s accommodations.

Kyra deals with direction well. She’s a quick learner, as they say, managing to intake information, process and react faster than most people I’ve encountered. Certainly, more so than myself. So, when I hollered “No!” she took that as stop. Smart.

A big handful of brakes, her feet down, a complete stop. The hulking American sedan swerved slightly and proceeded into the evening. That night we talked about how close she’d come, and how glad we both were that our in-helmet communication systems were installed, charged and working correctly.

How a headset can save headaches
While this might have been the first time our SENA systems literally saved our asses, it certainly wasn’t the first time we’d avoided other sorts of problems, thanks to our ability to communicate while riding. Missed exits on the Interstate. Navigating Los Angeles. Herding my father across the country. Just a few examples of circumstances when our headsets saved us headaches, if not something more severe.

But for some people, there’s a cost, and I’m not talking about the MSRP of the latest Bluetooth com system. When you install a headset system and pair it with another person, gone are the days of mindless miles, with nothing but pure engine sounds and dense air impacting your helmet to fill the vacant spaces between A and B. These are replaced instead by the standard sort of chit-chat that comes out of a couple, going over finances, figuring out what to eat that evening, talking about an article you’d read earlier in the day.

I’m not complaining. Actually, I enjoy my ride more when Kyra and I can kick around ideas and argue about what to eat. But I suspect some riders prefer peace and quiet in their helmets.

What I can say, however, is that when the time comes to talk about what’s happening around us — where to turn, things to avoid on the roadway, when to accelerate and pass a slowing moving semi, etc. — I wouldn’t trade those 10 seconds for any amount of peace and quiet.
Why you might need a Bluetooth com system
Maybe you’re a lone wolf, riding off into the sunset alone in your saddle. Why would you need a Bluetooth communication system? Because Google Maps and turn-by-turn navigation; the ability to call emergency services from an accident scene without even removing your helmet; the option to replace that droning wind noise with a bit of Backstreet Boys; or just to be able to call your friends while riding through a tunnel and make them jealous with the sound of the revving engine bouncing off the wall. Not only will a headset allow you to navigate more safely, but it also lets you continue with your life while commuting or traveling. 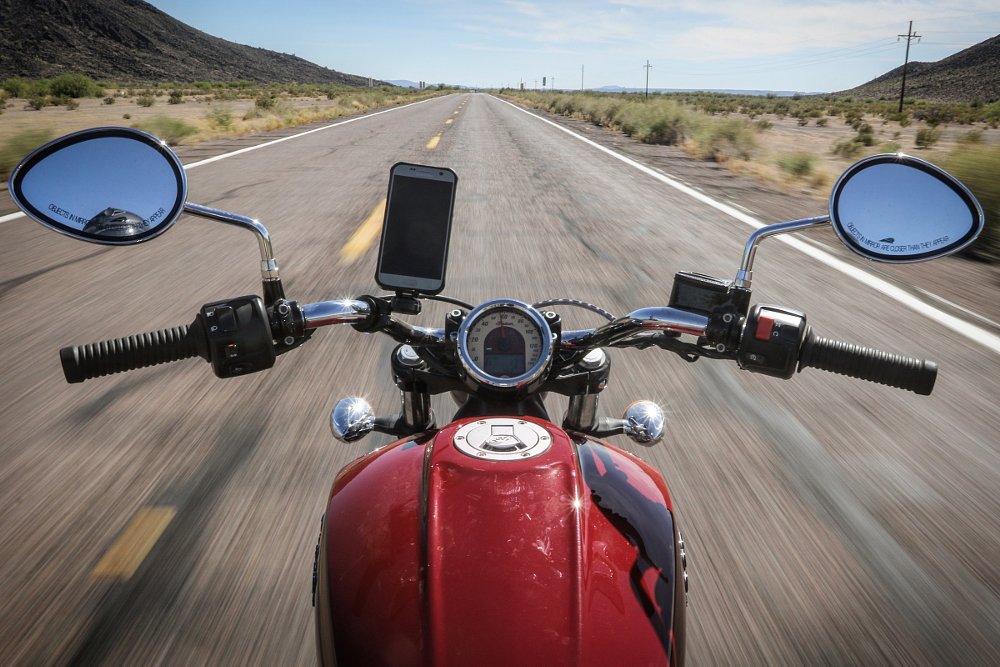 We have added SENA headsets to all of our helmets (you only need one unit, but multiple mounting kits, which are cheap and easy-ish to install). I don’t think we could live without them at this point.

Another example: On a recent ride across Italy, Kyra had affixed her phone to the fuel tank of her Monster 1200 S thanks to a RokForm case with a magnet on the back. My Multistrada 950’s fuel tank is covered in plastic bits, so she was forced to play navigator. After downloading the offline Google Maps for the surrounding areas, Kyra was able to direct us from the center of Bologna to the coast, along Italy’s western seaboard, eventually over the border into France and then back a few days later.

Along the way she dictated our directions to me via our headsets, giving me fair warning when a turn or intersection or accident was approaching. When she rolled through a yellow light while I lagged behind to take photos, she told me where she’d be waiting. And when my light went green, I was able to let her know when to throw her kickstand up and get going.

Yet another example, this time off-road: While in Colorado last summer, Kyra and I joined the gang from REVER for an afternoon of single-track shenanigans outside of Eagle. The day went from fun and flowing to “How the hell are we getting up that hill?” And when one hill lead to yet another, even steeper hill, I coached Kyra on the line I had taken on my ascent, telling her what to avoid, when to grab a fat handful of throttle and, inevitably, when to let go and get off the bike — which she did in spectacular, wheel-to-the-sky, whiskey-throttle, onto-her-ass fashion, I might add. Again, all of this was accomplished over our communication systems.

I’m not trying to sell you on a headset. We use SENA, but I know there are plenty of other, equally as awesome brands out there that do essentially the same thing. What I am trying to do is convey the value of these systems for the modern motorcyclist. The technology available to us is astounding and not to take advantage of it would be silly, in my opinion.

Biker Due In Court Charged With Taking Selfies While Driving