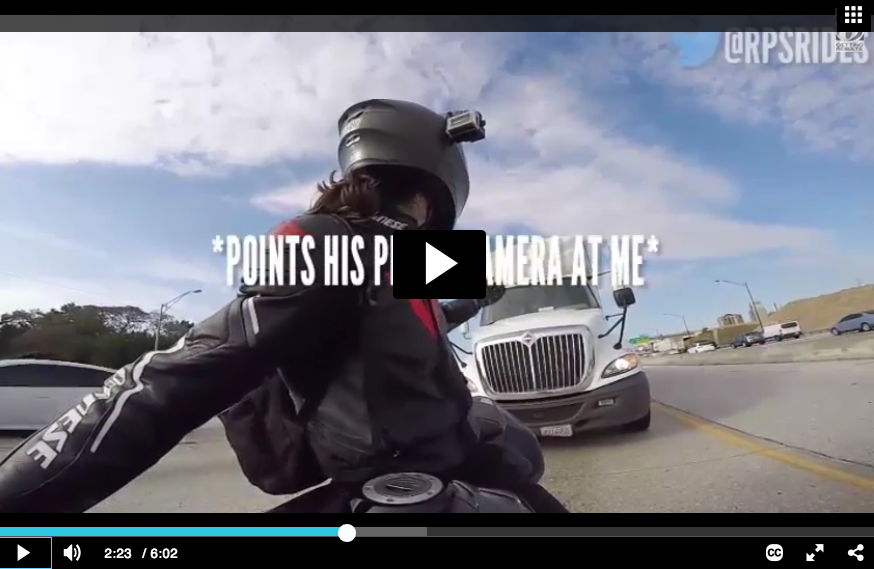 A YouTuber Biker with cameras mounted on his motorcycle and helmet has become an internet celebrity by posting YouTube videos that show him riding dangerously on Central Florida roadways.

In his attempt to attract online viewers, the biker is endangering the lives of other motorists, according to state troopers.

“He has no regard for anyone else out on the roadway,” Florida Highway Patrol Trooper Steven Montiero said after News 6 showed him some of the biker’s YouTube videos.

“For him to build a fan base off of dangerous situations and disrespecting other drivers is just plain wrong.”

In one of the videos, the motorcycle’s speedometer can be seen reaching 132 miles per hour as the biker zooms down I-4 at night.

As the helmet’s microphone records the biker criticizing two other motorists for changing lanes without using their turn signals, he rides closely alongside the cars and appears to slap their sideview mirrors with his hand.

Another video shows the biker running a red light in front of Princeton Elementary School in Orlando as a school crossing guard stood in the intersection and children waited along the curb.

“Dang!  I was flying through the school zone,” the biker said after his motorcycle passed just feet away from the crossing guard.  “That guy was not happy about it.”

Other YouTube videos show the biker driving his motorcycle down a sidewalk at night, colliding with a trash can set along the curb, nearly getting hit by an SUV while riding down a bicycle lane through College Park and cruising in the wrong direction along an I-4 emergency lane as he searches for a license plate that reportedly fell off his bike.

“The behavior is disgusting, it’s not funny, and it’s not something any of us in law enforcement or the community want to see,” Montiero said.  “This rider is just brewing a recipe of disaster every time he is out on the roadway.”

In many of the videos, the motorcycle is seen driving between two slower-moving or stopped vehicles. The maneuver, called lane splitting, is allowed in some states but is illegal in Florida.

The biker never reveals his name and conceals his identity by blurring his face in the videos or hiding behind his motorcycle helmet’s mask.

However, News 6 has learned the biker is Jake Anthony Bigby, the 28-year-old son of an Orlando pastor.

“They’re entertainment,” Bigby told News 6 when asked why he posts videos of his risky rides through Central Florida. “That’s the nature of getting something to be seen or viewed.”

Besides placing advertisements on some of his YouTube videos, Bigby solicits donations from his viewers.
It’s unclear how much money those clips have generated.

“I’m not the first (to post these types of videos),” Bigby said. “I know those get the clicks.”

YouTube company representatives did not respond to multiple emails from News 6 inquiring whether Bigby’s videos comply with the video-sharing website’s rules for posting videos.

According to YouTube’s Community Guidelines, the company may restrict or remove videos that “encourage dangerous or illegal activities that have an inherent risk of serious physical harm or death”.

Bigby claims he has received threats from some YouTube viewers who oppose his videos.  Even though he includes shots of his home, neighborhood, and workplace in several of his videos, Bigby expressed concern that critics might try to locate and harass him.

“They are very well-protected in their vehicles and I’m not,” Bigby said.  “Whether or not I’m speeding doesn’t change the fact that somebody could kill me every easily by switching lanes on top of me.  And they tend to do that often.”

“For someone who does 100  miles (per hour) plus on the interstate, he’s a pretty ideal hypocrite here,” Montiero said.

In one video, Bigby points out a semi truck ahead of him on I-4 that appears to change lanes without signaling.

Bigby then drives on the shoulder of the interstate to get along the left side of the truck, a move the FHP calls illegal.

“You just cut off everybody!” Bigby yells to the truck driver from the emergency lane as they roll side-by-side down I-4.  “Idiot!”

The motorcycle then pulls in front of the truck and comes to a complete stop as Bigby continues to scold the truck driver.

“Use your blinker!  You got blinkers?  Use them!” Bigby screams as traffic backs up behind the stopped semi truck.

“I don’t think he understands the severity of what he’s doing,” Montiero said.

In another video that troubles the  Highway Patrol, Bigby can been seen riding his motorcycle on I-4 alongside a car with its rear window open.

He then tickles a child’s arm that is resting on edge of the window, the video shows.

“Scared the heck out of him!” Bigby said as he rode away laughing. “That kid’s face was like ‘Oh!’”

The profile photo for Bigby’s YouTube channel is an image of him touching the unidentified child’s arm.

“That’s battery,” Montiero said.  “Anytime you touch someone without their permission, that’s a crime.”

As News 6 attempted to ask Bigby about that touching incident, the biker ordered a reporter to leave his property.

In a recent YouTube video titled “I’m sorry, I’ve been an idiot”, Bigby apologizes to his critics for some of his more controversial videos, most of which remain online.

Despite what troopers describe as reckless driving seen on the biker’s videos, Bigby has received only a few traffic citations in recent years, state records show.

In February, an Orlando police officer cited Bigby for failing to display his tag.  During the traffic stop, which Bigby recorded on video and posted online, the biker explained that his new license plate was in his backpack.

Police ticketed Bigby in 2015 for crashing his sedan into another car, causing minor injuries.  That same year he was caught on camera running a red light.

Following News 6’s investigation into the biker, state troopers said they have begun compiling Bigby’s videos and are now on the lookout for him.

Lakeland WWII Veteran Is Reunited With A Piece Of His War

The 7 States With the Most Motorcycles Per Person