Blog - Latest News
You are here: Home1 / Moto Events2 / WHEELS UP GUNS DOWN 2018 : THE FALLOUT CONTINUES

The ” Wheels Up Guns Down 2018 ” MLK ride-out in South Florida concluded with several arrests and dozens of vehicles seized after a day filled with chaos in some streets.

The Miami-Dade Police Department and Broward Sheriff’s Office said that a total of 20 arrests were made during the Monday holiday – a number that goes up to 31 when the entire weekend is included.

“We thank everyone who helped spread a message of zero tolerance for reckless behavior on our streets,” BSO said in a statement.

A large group of riders hit the streets in Miami-Dade Monday afternoon and were quickly confronted by Florida Highway Patrol troopers on the Gratigny Expressway in northwest Miami-Dade. The riders then turned around and drove the wrong way on the expressway before exiting.

Footage showed hundreds of speeding riders running red lights, driving on sidewalks and weaving in and out of traffic.

“‘Wheels Up, Guns down’ lost whatever positive message they had years ago. Once you cross the line & blatantly endanger other drivers/pedestrians & yourselves, people stop listening to the message & only watch the chaos being created,” Perez wrote on Twitter. “It’s become an excuse for disobedience/lawlessness.”

At one point, an FHP trooper tried to stop some of the riders and got out of his car holding what appeared to be a Taser. At least two riders were seen kicking his car.

Although there were no confirmed crashes linked to the ride-out, police said a 14-year-old who was driving a small motorcycle was hospitalized after a crash. The circumstances of the crash and whether its related to the ride-out are unclear.

On Sunday, officers made at least one arrest at the gas station on Northwest 183rd Street and 22nd Avenue in Miami-Dade, officials said. They also recovered at least one off-road vehicle during the takedown.

Law enforcement agencies in Broward, Miami-Dade and across the state are instituting a “no-tolerance” approach in anticipation of the WHEELS UP GUNS DOWN 2018. Proponents say the event is a rally against gun violence, while community leaders and police departments say it’s a public hazard.

“They’re basically hijacking this name and using it as an excuse to create havoc in the community,” one police official said.

Surveillance footage from over the weekend shows a police officer breaking up another group of ATV riders at a Miami Gardens gas station. Video captures the police officer chasing away the riders, while one rider opens the police cruiser’s door. Another man runs toward the vehicle and starts jumping up and down on the back of the car.

Miami-Dade police say the riders are a danger to themselves and commuters around them. Riding an off-road vehicle such as a dirt bike or ATV is illegal on paved roads.

On Instagram, Miami-Dade police warned against driving the illegal vehicles on busy intersections and roadways. 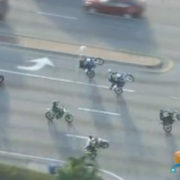 Wheels Up Guns Down 2017: The Crackdown
0 replies

5 Ways To Die On A Motorcycle – McRider
Scroll to top