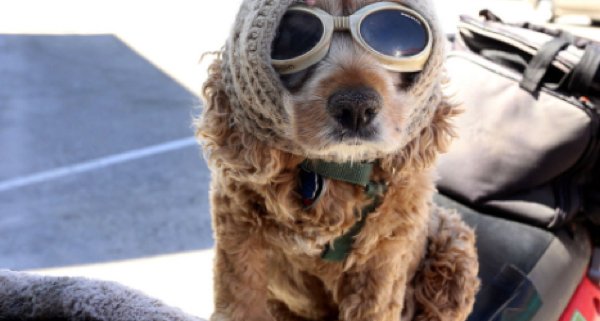 Sitting comfortably on a well-worn pad atop the Kawasaki that carried him into Hamilton, the little gray-muzzled cocker spaniel watched the world go by through his pair of shaded Doggles.

As cool as a cucumber, he hardly glanced at the small horde of people gathered around him just off the town’s Main Street. Some aimed their cellphone cameras. Others just pointed their fingers and smiled.
This isn’t anything new. Barney is used to being a star attraction. Over the last nine years, he has been the center of attention almost everywhere that his traveling partner, Craig Connor, decides to stop for a moment on his long distance rides across the country.

On a recent afternoon on his travels with Barney, Connor was inside a local restaurant getting a burrito to go.

With his ears comfortably wrapped in a knitted scarf, Barney couldn’t have been more content to just hang loose and wait for those wheels to start spinning again.

Since Connor found him at a cocker spaniel rescue in California, the duo have traveled more than 64,000 miles together on mostly back roads through 20 states, including a trip to Vancouver, British Columbia, to attend the Winter Olympic Games.

Connor grew up riding motorcycles and his dogs were always part of the package.

“I’ve taught a lot of dogs to ride,” said the Corvallis man. “Most aren’t too bad. You put them on and they just go with the flow. Some are better than others.”

Connor comes by training naturally. His father, Kent, is known in the Bitterroot Valley for his well-trained draft horses that have been an integral part of many a celebration.

When Connor decided to start taking long-distance motorcycle trips back in 1995, he had another cocker spaniel that traveled with him.

“He was a little black and white cocker,” he said. “On that first trip, we went from southern California to Alaska.”


Back then, the genius who came up with the idea to create goggles for dogs hadn’t yet had that brainstorm, So I had to macgyver things for my travels with barney.

“I just found a pair of kid’s goggles,” Connor said. “They seemed to work alright. I like to put a scarf around their head, too. It keeps the wind out of their ears. If you don’t do that, they flop around all the time. The scarf keeps the bugs and dirt out.”

Barney has always been a natural motorcyclist.

“He just took to it right away,” Connor said. “He’s just been a mellow dog right from the very beginning.”
Barney was dropped off at the doorstep of a shelter when he was 3. Connor found him through the Second Chance Cocker Spaniel Rescue organization.

But Barney wasn’t his first choice.

Connor kind of preferred black and white or just pure black cocker spaniels. He tried another dog first, but that one had been abused in its earlier life.

“He was too aggressive,” Connor said. “He bit me like 25 times. … Barney was actually my last choice.”

But it’s been a choice that he’s never regretted.