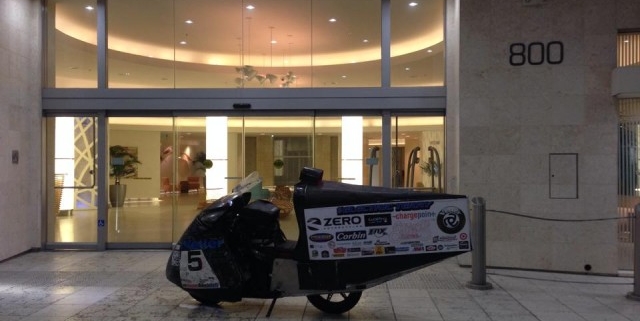 You may recognize Terry from his several cross-country attempts on his electric motorcycle. Now he has pushed the limits even farther, traveling 1,000 miles in less than 24 hours on his modified 2012 Zero S.

The Iron Butt Association (IBA) is well known to motorcyclists as being a group of long-distance riders who cover remarkable distances in short amounts of time.

They are not a racing group, but rather a community of touring bikers dedicated to safety and enjoyment of traveling on two wheels. And it’s quite an accomplishment to gain certification as an IBA rider.

The vast majority of certified rides are done on Harley-Davidson, Honda, or BMW bikes–but now thanks to The Iron Butt Association’s 1st Electric Motorcycle Member you can add Zero Motorcycles to that distinguished list.

There are several ways to become a member. One is to ride a motorcycle 1,000 miles in 24 hours–and the distances only go up from there.

The Iron Butt Association (IBA) recommends a 20-minute rest for every hour of riding. This means gas-powered bikes typically finish the SS1000 (Saddle Sore competition for a 1,000-mile journey within one day) in 18 to 20 hours.

Terry finished his thousand miles in 22 hours and 57 minutes.

I asked Terry about the toughest part of the journey. He said it was preparing for something with a huge amount of uncertainty, which weighed on him immensely.

What if there was traffic? What if other people are charging? What if chargers didn’t work? Knowing the attempt would be public, he had major concerns about failing.

Was there any way to do better, make this foolproof? In the past couple of years, something had always gone wrong–usually in Texas. However, California treated him well.

Terry said he even thought “Should I even commit to doing this?”

The trip was designed to kick off National Drive Electric Week, which lasts through this Sunday.

Once Terry was riding, though, he was back in his comfort zone. Many people called throughout the trip including his sister. He listened to music, talked to friends via Bluetooth helmet phone, and kept to a steady speed.

The riding part, he said, was easier than the anticipation.

The scariest part of the journey happened on California Highway 154 in the mountains between Solvang and Santa Barbara. Going downhill toward Santa Barbara, one part has the road next to a cliff; Terry was riding there from 4 to 5 pm, just a few hours into the trip.

With extremely strong winds of 40 mph, he was hit with a wind gust like never before and blown toward the edge of the cliff–within a foot of a guardrail, which would have tipped him over and tumbled him down the cliff.

His heart skipped a beat and a shot of adrenaline kicked in, but Terry managed to keep the bike on the road. Any other motorcycle would have been blown around by the same winds.

How To Nominate For Mission Thank You
Scroll to top