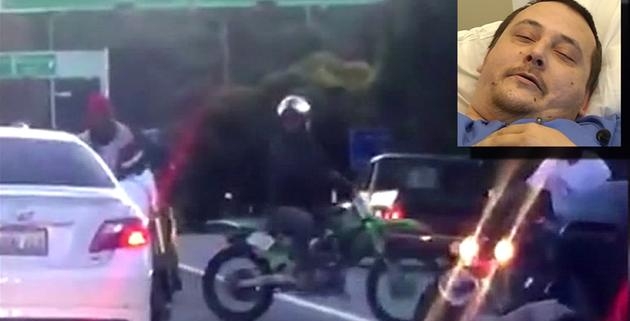 Police and the California Highway Patrol say their investigation into a fight on Highway 101 in San Francisco between a group of dirt bikers and a Lyft driver continues. A source tells ABC7 News that investigators are looking at Bayview gang members as suspects in the beating, but have not yet identified anyone.

These are difficult investigations as these dirt bikers normally wear masks, covering their faces and have no license plates. Police are relying on video tape and information from witnesses at this time.

In the case of this brutal attack, the California Highway Patrol is the lead investigative agency, while the San Francisco Police Department is assisting them.


Investigators believe some of the suspects are from the Bayview District and belong to one of the gangs. “There are a number of officers throughout our district stations. We’ve had contact with some of these folks on the bikes, so they know who some of them are,” San Francisco Police Dept. Sgt. Mike Andraychak said.

It was a brutal attack captured on cellphone video.

Motorcycle Gets Towed With The Driver Still On It

The Iron Butt Association Needs More Videos Like This One: Plane Crazy 1000
Scroll to top