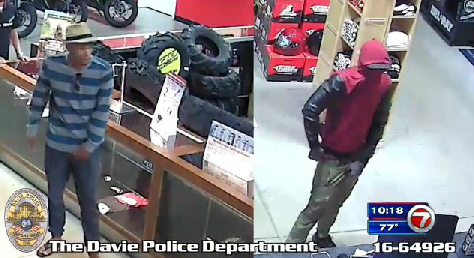 Surveillance cameras rolled as the subjects broke through hurricane-proof glass at the Rick Case Honda Powerhouse motorcycle store, Nov. 12. “It took them quite some time to get through the hurricane glass with a hammer, but they were eventually able to get in,” said Davie Police Sgt. Mark Leone.

On the video, one of the subjects could be seen holding a gas container as they made their way toward the motorcycles. “Once inside, they moved four motorcycles towards the exit and made an attempt to get them out,” said Leone.

However, they didn’t get away with the goods. “These individuals all came prepared with individual bottles of gas to put in the motorcycles, you know,” said Leone. “However, their attempts failed because they were not able to get the motorcycles out of the showroom.”

Wheels on The Road Jan Issue 2017
Scroll to top