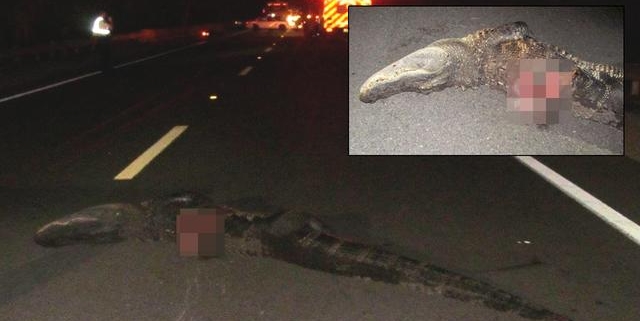 A motorcyclist is in the hospital with serious injuries after colliding with a massive alligator on a Wimauma road early Friday morning, the second such crash in Florida this week.

Calun Nelson, 27, was riding his Suzuki motorcycle westbound on State Road 674 just before 12:30 a.m. when an alligator crossed the road right in front of him. Nelson collided with the 10-foot, 9-inch gator and the impact threw him from the motorcycle.

Nelson was airlifted to the hospital in serious condition, but he has since been updated to good condition. He is expected to be OK.

A trapper removed the alligator from the roadway. The alligator “is listed in critical condition,” an FHP spokesman offered.

This is the second alligator-involved crash this week. On Tuesday, South Florida attorney Jennifer Rosinski struck a 9-foot alligator on I-75 in North Port, causing her car to flip multiple times.