The London Bike Shed Show will attract thousands this weekend and there are big plans to take it further afield.

It all started in late 2011 when Anthony ‘Dutch’ van Someren blogged about his transition from trackday sportsbike power- ranger to jacket ’n jeans custom biker. Two years later, Dutch and his mates had launched a motorcycle exhibition under a Shoreditch railway arch which featured some very stylish custom machines.

Later in 2013 came another, bigger show in Shoreditch. Followed by an even bigger event at Tobacco Dock. Then Paris. They opened a permanent home to the BSMC early in 2016 and now there are plans to go even further. There’s talk of shows in Spain, Italy, even America.

So we figured it was a good time to sit down with Dutch and discuss The Bike Shed one year down the road from opening its permanent home in Shoreditch.

The transition from running bike shows on a part-time basis to a full-time bike business must have been a pretty massive undertaking. What was the process? 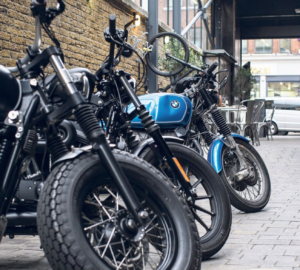 We ran the first show in May 2013 which went down well but when we did show number two in October 2013, which was only seven or eight arches along from where we are now, people thought it was a permanent venue for the Bike Shed MC. We had 65-70 bikes, 5000 people and we thought; ‘this is great, what if we were open every weekend?’

So that sowed a seed. But why, from your personal point of view, risk everything – especially as you had a successful career in media?

I tried to imagine the Bike Shed as a permanent venue. It couldn’t be a museum. It had to serve people. It had to be part of a club. I have this theory that to become a biker there’s a rite of passage. It takes real commitment to become a biker. And being part of a club, for a lot of people, is part of being a biker. So I thought if we had a permanent venue, everything had to be curated by us, for people like us.

How can you be sure that this scene you’ve built the Bike Shed around is going to exist in say five years time?

We’ll do one show in Europe in 2018 and one in the USA. Next year we’ll think about where to go next. I didn’t do all this to run a restaurant and a barber- shop. I did this to galvanise a scene. It’s a trend that’s never gone away but the manufacturers are driving it now so it can’t go away. This style of motorcycle is sucking young people in. It’s affordable, non-intimidating and cool. It may evolve but it won’t vanish.