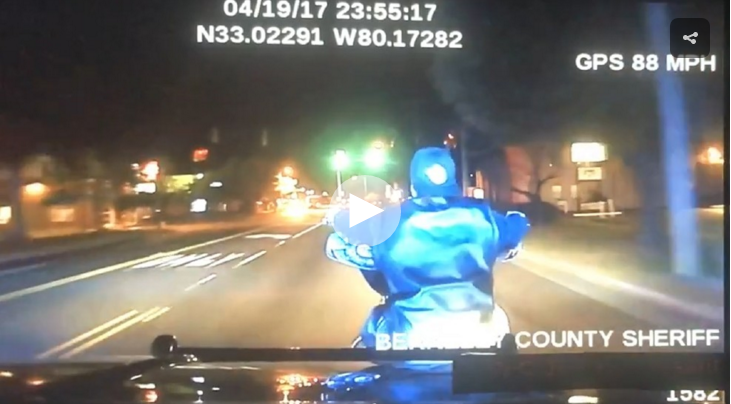 
Dash camera video and the official incident report from the Berkeley County Sheriff’s Office are shedding light on the circumstances leading to an accident in which he hits and kills motorcyclist during a high speed chase through the heart of Summerville, South Carolina, Wednesday night.

After nearly 6 minutes and more than seven miles, with a speeds reaching as high as 112 miles per hour, a Berkeley County Sheriff’s Office deputy appears to bump the rear of the motorcycle twice with the front of his cruiser.

Moments after the deputy made contact with the motorcycle a second time, dash camera video shows the driver lose control and crash into the passenger side of a bystander’s car as it changed lanes in front of him.

The motorcyclist, 30-year-old Robert Lee Clark, was not wearing a helmet and died at the scene, despite attempts to revive him using CPR by the deputy chasing him, according to an incident report released Thursday.

The dash camera video provided by the Berkeley County Sheriff’s Office ends moments after he hits and kills motorcyclist, and does not show any of the aftermath, during which the deputy, identified as James Vansant, reportedly attempted CPR on Clark.


Deputy Vansant in his report only mentioned contacting the motorcycle once prior to the crash. The sheriff’s office in its official statement on the incident also only mentions one instance of contact between Vansant’s vehicle and the motorcycle.

The sheriff’s office said the contact was caused by Clark slowing dramatically after he appeared to “miss a gear.”

The incident report goes on to say the Dorchester County coroner searched Clark’s body and motorcycle, finding 55 grams of green plant material, a pipe and a rolled cigarette.

According to the incident report, Deputy Vansant’s began chasing Clark at 11:51 p.m. Wednesday when he saw him speeding on College Park Road in Ladson. Vansant reported Clark was doing 66 mph in a posted 45 mph zone.

Vansant said in his report he pulled out and turned on his blue lights to initiate a traffic stop, and Clark sped up.

The dash camera video shows it took Vansant a full minute to catch Clark, even doing 112 mph at one point. The sheriff’s office in its official statement on the chase reported the top speed at 111 mph.

Once Vansant caught up to Clark, the video shows Clark began driving erratically — driving on the wrong side of the road, driving in the median, slowing down to only 33 mph, and speeding up to more than 100 mph again before finally running the red light at the College Park Road / Highway 17-A intersection.

From there, the video shows Clark turn left onto 17-A toward Summerville, where moments later a second deputy is shown joining the chase. Speeds again reached more than 100 mph (as high as 111), and continued at that pace for nearly a minute, during which Clark is shown running a second red light.


The video goes on to show Clark slowing to between 75-85 mph after crossing over the I-26 overpass into Summerville, again driving the wrong way on 17-A, running a third red light and speeding back up to more than 90 mph on North Main Street. The posted speed limit there is 30 mph.

At 5:23 into the chase, deputy Vansant appears to bump the rear of Clark’s motorcycle with his cruiser a first time. Vansant was going 88 mph at that point, according to the video.

Four seconds later, at 5:37 into the chase, Clark gets into the right lane, and as he does, Vansant again appears to bump the rear of Clark’s motorcycle, this time more forcibly, but at a slower speed (64 mph).

As this happens, a car in front of Clark and Vansant shifts into the right lane, which is a turn-only lane leading to West Luke Avenue. Clark then hits the curb and loses control, before striking the passenger side of the bystander’s car.

Clark then disappears between the car, a light pole and shrubbery on the road side. The motorcycle reappears a second later skidding down the roadway, while Clark is no longer visible.

How To Nominate For Mission Thank You

A GUIDED MOTORCYCLE TOUR : Is It Worth The Investment?