It started, as these things do, as a pipe dream. The ( Harley-Davidson Ballpark Tour ) delectable and impossible, a random thought passing through the drabness of office life. What would you, the hardcore baseball enthusiast, do with a couple of weeks off and access to a motorcycle? Would you act on that dream of touring for the singular purpose of watching baseball? Would you hit the road simply to visit some of the world’s most important and iconic ball fields? Yes. The answer is wholeheartedly yes.

And so the idea behind a project we dubbed America’s Pastime percolated. On a tour of the Northeast—arguably the center of gravity for Major League Baseball—it would be possible to see both the oldest and newest fields. Specifically, Fenway Park, as the oldest, home of the Boston Red Sox since 1912. And the new Yankee Stadium, which opened to much fanfare in 2009. (Since then, there are newer fields as well—the cross-town rival Mets’ Citi Field, also opened in 2009, as well as Target Field in Minneapolis, which opened in 2010, and the 2012 opening of Marlins Park in Miami.

In short order, we developed a tour to start in Boston and take us through the Bronx, Philadelphia, Baltimore, Pittsburgh, South Bend, Chicago, and, finally, into Milwaukee, where we’d return the fleet of2017 Harley-Davidson Touring models we’d borrowed for the occasion. Planning a trip with a game nearly every day wasn’t easy, but we found a more-than-workable solution by adding a Single-A game in South Bend, Indiana, and a behind-the-scenes tour of the White Sox facility thanks to our special guest, Ron Kittle. 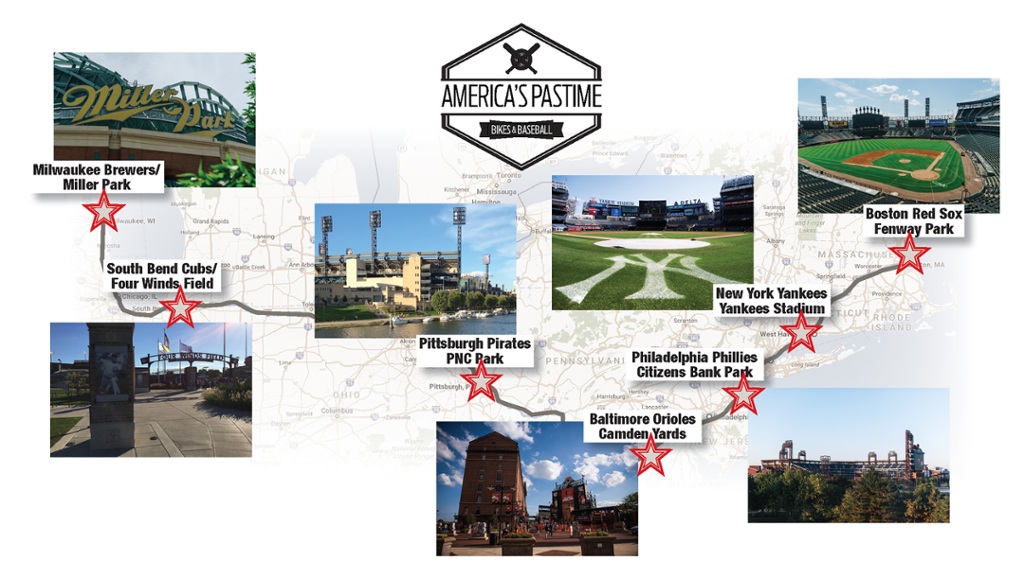 Ron is our kind of guy. He’s a serious motorcyclist with his own Harley Fat Boy, a serious retired player, and a serious fan of the sport. Ron joined the White Sox for his first full year in 1983, playing a combination of left field and designated hitter. Although he had 150 strikeouts that year (leading the league), he popped 35 home runs (a club record for a rookie) and knocked in 100 runs over 145 games to give him Rookie of the Year honors and an invitation to that year’s All Star Game. He missed the American League home run title by just three dingers. The Sox won 99 games that year to the AL West division title; they would fall to Baltimore in four games in the AL Championship Series that year. It was the season known as “Winning Ugly,” a term offered by another team’s manager to describe the unlikely way the Sox were winning, capitalizing on other teams’ mistakes—but being good enough to take advantage of also being lucky.

A former steelworker, Ron is a big man (listed as 6-foot-4 and 200 pounds in his playing days) with an equally big personality. Wherever we went, he knew someone or had a story about a place, a player, or a game. And they were all brilliant. His wife, Barb, brought her own H-D Softail and a personality that could clearly go toe to toe with Ron any day of the week. Along with these two we had a total of 12 Motorcyclist readers in two groups of six, with overlap at our Baltimore game, in part to give our readers a shot at a cool vacation and in part to get their feedback on the new 2017 Harleys.

The CHIPS Have Fallen