Kelsey & Gabe’s Pan Am Mission:
Pirates of the Patagonia Waters Part I

Its somewhat hard after a whole day of riding to place your thoughts and experience into an organized blog such as Screaming Thunder. I am on the Evangelista Ferry on day three catching up on my Pan Am Rider’s Reports. Kelsey and I have wondered if it was even worth taking the ferry due to the unexpected delays. The first delay was moving the ship-off date from Friday to Saturday. Arriving to Puerto Montt NaviMag Ferry office Saturday morning the winds and rain had all the ports closed until further notice by the harbor master. Once we were on the ferry the Captain fell ill and we had to pull over to rush him to the hospital. It seemed we were waiting for the new captain forever. Currently we are waiting for the tide to rise so that we can enter the narrow straits of our trip that means no more stormy waters of the pacific. I will get into that further below in detail. 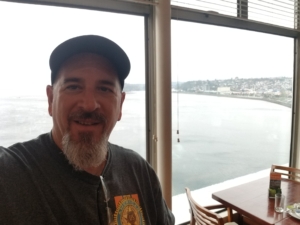 The Evangelista Ferry Experience:
The folks on the ferry are from all over the world. France, Australia, Britain, Chile, 2-Americanos (you know who), Switzerland, and Sweden. There was this one guy who is a Chilean attorney who had eyebrows that just wanted to reach out and hug ya. YES, they were that long and creepy. I mean before the guy walked into the room his eyebrows could be seen before his body as if making an announcement to his entering of the room like the royal British types did back in the day. There were these two ladies from France and one of them was a hairstylist who set up shop in the rec area giving away free trims to make the time go by faster. When Mr. Caterpillars sat on the chair the Frenchie first started hacking away at those out of control eyebrows.  These eyebrows were the main talk of the boat for the first two days. I mean these things were so long that he would go out in the rain and his eyeballs would be dry due to the roof like structure of those furry frows. 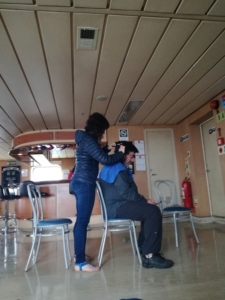 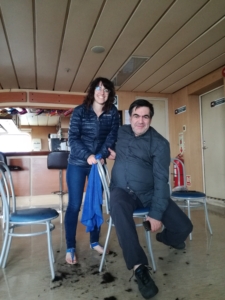 Look at all that eyebrow hair left on the floor folks! 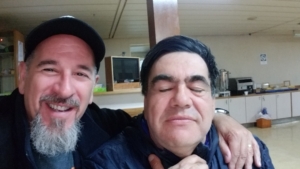 Mr. Eyebrows Up-Date: As all the 30 or so passengers mingled and introduced themselves about the ship at various times the topic and stand out was Mr. Eyebrows. We would at all meal times congregate at our tables and observe the others and their cultural traits. Hey, it was boring on ship with no internet, no cell service, no cable and just mountains and water to stare at for days. Mr. Eyebrows became the topic of discussion as we joined to break the ice and giggle with joined strangers in lame attempt of drama gossip.

As mentioned in a former report the ferry does not permit the sale, possession or consumption of booze of any kind whenever or whatever. Safe to say the passengers I described as the pirates of the Patagonia smuggled wine, vodka and I personally stowed away various bottles of Jack Daniels and Jim Beam. The first night I was on the hunt for a bottle opener with a cloak of discretion. I discovered one from an Australian couple whose wife was of Indian descent from Britain who was a doctor. 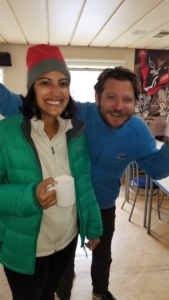 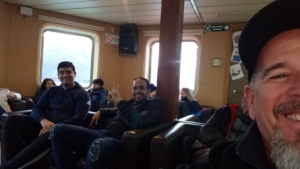 Nice folks with great traveling stories since they were taking a year off life to enjoy life by traveling around the world. By the end of the night it seemed the 60{6afdcdf14f1f3d0d6d046bdd6bb6844d1d6f78a435ef85ae323b1d28ccc5d3f7} of the passengers were in possession of the prohibition substance that was historically outlawed in the 1930’s. The other 40{6afdcdf14f1f3d0d6d046bdd6bb6844d1d6f78a435ef85ae323b1d28ccc5d3f7} where truckers waiting to arrive to port to continue their delivery of seafood, fishing nets and other commodities. 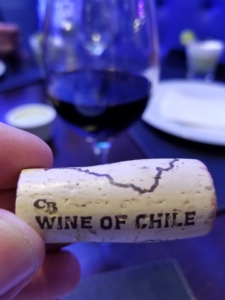 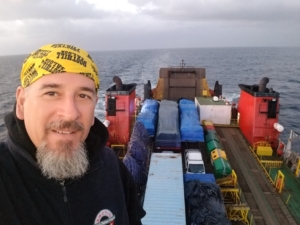 As we drank and shared travelers war stories, we all kept tabs on Mr. Fro-bars. He tried to flirt with all the women and in my opinion not to well because he was so obvious and trying too hard. He was a square peg trying to get into the round hole and he just didn’t fit. The smokers would go the back of the ship to smoke their fags as the Brits stated and I would join them with my Padron Cigars. In the arctic cold air struggling to keep warm we hear how Mr. Brows got a haircut and his steel wire eyebrows where trimmed and cleaned up well. This was rewarded because as they say there is someone for everyone. Mr. Fro-Brow seemed to be macking on this Swedish woman who speaks like 100 different languages. 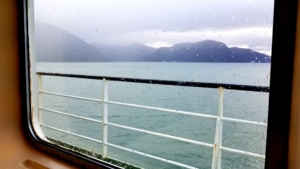 During the turbulent Pacific Ocean period I slept for two days only staying awake for 5-7 hours in that violent leg of the trip. It was early in the morning around 2 am where I decided to crank out some of my Rider Reports. Sitting in the main dining area I heard voices outside and I opened the door and there was Mr. Fro-Bars and the chunky Swedish lady laughing their life away until I yelled out WHAT’S UP?

I will stop here and share the trip about the boat ride in Rider’s Report #3 the boat ride. But for now, I need to you donate some $$$$$$ for the American Legion. If you read my previous reports you know that I am riding for my local So Flo veterans through the American Legion (Post 180) located in Plantation, FL. The American Legion completes 100 years in service to our vets and their families. Post 180 does what they can to address the needs of our veterans within their reach in Broward County, FL. It is for this great cause that I am riding and asking you now to donate what you can. I generally ask for you all to donate a minimum of $20 but if God has blessed you donate more like $50 or $100! I ask you to donate what you can.

Kelsey & Gabe’s Pan Am Mission RR-2: Heading to the Bottom of the Wo...