Blog - Latest News
You are here: Home1 / Lifestyle2 / How To Avoid Title Issues When You Buying A Used Bike

Most people are skittish buying a used bike.

Understandable, right? Nobody wants to get taken. The reason so many folks fret, I’ve come to discover, is that they don’t know exactly how they’re gonna get took. So they worry. This article is here to help you discern between a good deal and bait that scumbag sellers use to lure unsuspecting saps into buying a headache.

Before we start: These are the opinions of Lem-lem, not necessarily those of RevZilla. If I condone something illegal, well, that’s Lem-lem talking to you, not Big Orange. So with that out of the way, in case you’re thinking about buying a used bike in February, like I suggested, let’s talk about some common title scenarios and what you might want to do if you run into them while buying a used bike.

No title
A seller with no title might be completely legitimate, or a total scammer. If the bike shows signs of being stolen — busted ignition lock, nervous seller, or it’s been parted out — you probably want to decline the sale. Find another reason to ixnay the purchase, though. If someone was willing to rip off a bike, they may be willing to cave in the back of your skull to get the wad of cash in your pocket. You can head these off at the pass by asking for the VIN. There is no valid reason for a seller to withhold VIN information at any time.

Now, if the bike appears to be clean and nice and the seller has you to his or her home, those are good signs. In some states, like New Hampshire and New York, bikes over a certain age don’t actually get titled. You’ll receive a transferable registration, which looks like a hokey little piece of paper, but it’s absolutely 100 percent legal. In that particular scenario, I say buy the bike — this is not a red flag at all. For the rest of the situations, where the seller should have a title and doesn’t? That’s a little more complex.


In nearly all states in the U.S.A., there are ways to obtain a legal title when buying a used bike. They range from a titling service like Broadway Title, which starts out around $500, to doing the legwork yourself, which is usually just a nominal fee, but can often require a trip to see a judge. In this scenario, you do have to make sure the bike isn’t stolen. That could be anything from “a few years” to “we still got that on file, and we want to talk about it.” If you’re satisfied that the bike is not hot (stolen), but instead just missing its paperwork, I would proceed with caution. For an old, rare or valuable bike, it can be worthwhile if you get a good enough deal, but usually these situations suck up a lot of time, phone calls, and legwork. At very least, make sure you get a bill of sale. If it’s notarized, all the better!

Floating title
You check out the bike, it looks good, and you’re ready to do the deal. The seller has a title, and it’s signed. The only rub is that it’s someone else’s name on there. Is this legit? Well, sort of. What the seller is doing is acting like a dealer. Rather than tie up time and money getting the correct paperwork, the seller never filled out the title and paid sales tax. People often do this when they know they’re going to “flip” a bike.

For the most part when buying a used bike, this is illegal if the seller is not a dealer, but probably not very immoral. The state gets screwed out of some revenue. There’s little chance of anything being shady here — if the bike was stolen, how the heck would the seller have also gotten the title? My advice in 97 percent of cases like this is to proceed as normal. (Of course, you can act concerned and see if you can chisel the price down some more!) 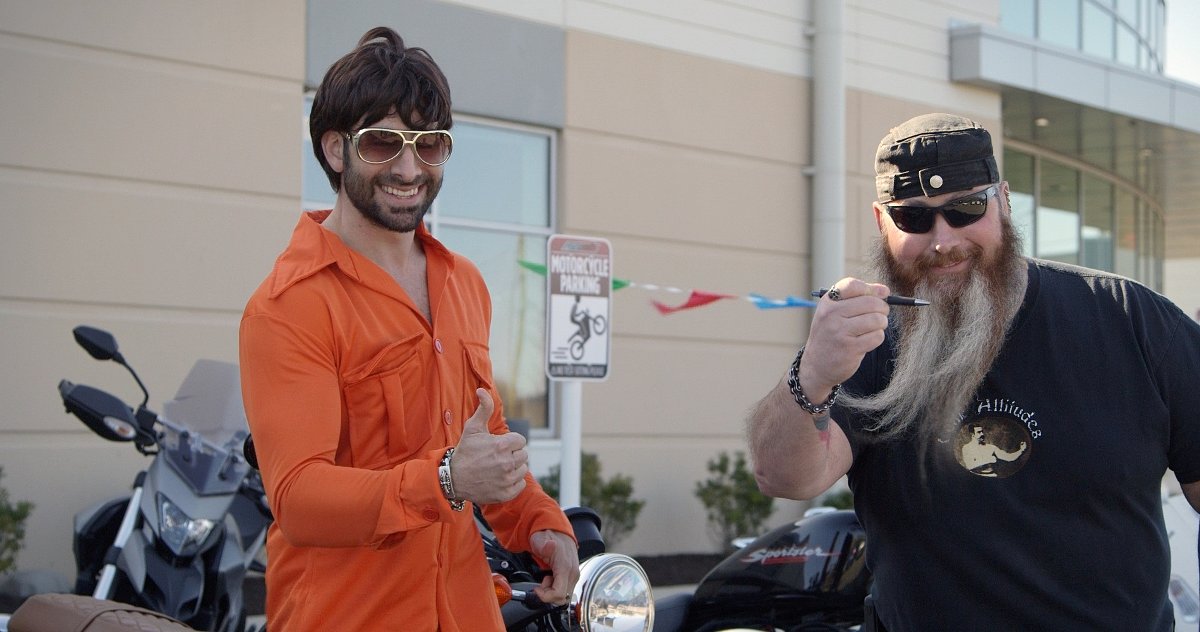 No numbers
Some states used to obliterate VINs when titling as Special Construction/SPCN/Self-Assembled. Some states would also obliterate VINs when a stolen bike was recovered. In both cases, I have seen state-assigned numbers stamped in or tagged, sometimes near the original VIN, sometimes in a totally separate area. If numbers have been removed and no legit numbers exist, the bike is very likely to be stolen. Avoid with extreme prejudice. Personally, I’d pass on these even if they were legitimately destroyed by the state. It screams “Stolen!” to a cop on the side of the road. I’m not saying they are stolen, I’m saying they look that way. This may be all the probable cause a cop needs to go on a fishing trip. Like our previous scenario, find a way to skip out on the sale other than blurting out “This is stolen!”


Knocked-over or “incorrect” numbers
This gets tricky. Usually “knocked over” (restamped) numbers or “number jobs” indicate a hot bike, but there are some legitimate cases of this occurring when buying a used bike. There is also the matter of factory restamps. For instance, some Harleys were mis-stamped at the factory. Numbers were re-struck, and those are not stolen. There’s also the perfectly legitimate case of an indie shop or dealer restamping cases, which was common for years before the practice was outlawed. Here’s how that worked.

Some guy in 1955 brings in his Panhead to the local shop because he blew up the motor. The mechanic pulls a rebuilt Pan off the shelf, and stamps the customer’s number into it with a set of factory-issued stamps. They reinstall it, and away he goes the next day. Later, they rebuild the broken Panhead at their leisure, and grind the number off the VIN boss, ready to repeat the cycle.

Would I buy it? Ugh. Maybe, if the price was right. The issue (again) is running a set of numbers that looks highly suspicious to Smokey. On the side of the road, this isn’t likely to matter. Your local cop likely has no idea whether your font should have a particular type of serif. He’s probably blind to all but the most egregious of VIN-pad grinding. However, plainclothes cops trawl the lots at lots of events (coughAmericadecough) and there are plenty of biker-only “safety checks.” (Read: mandatory motorcycle stops where bikers get shaken down for a bullshit ticket in the name of “safety.”) This subset of the fuzz is often aware of what your bike’s VIN should look like. Here, take a peek. This ain’t a new development. The scary part of this is that there are known errors in that booklet. In my mind, it’s easier to own something that conforms to what the fuzz thinks is correct.

Bike improperly titled to frame or engine
OEM bikes can legally have the VIN in a number of spots: the frame, the engine, or a combination of the two. Different years have different rules for different manufacturers.


Years ago, aftermarket frames did not legally need numbers. Aftermarket engine cases, too. Later aftermarket frames were required to have numbers. Many people legally and illegally swapped engines into frames. Because of this, there are many bikes incorrectly registered.

What does all of this mean when buying a used bike? Well, it means a few things. It means you should do your homework on what the bike’s numbers should look like, where they should be located, and what aberrations could exist. It also means that it’s possible for someone to legally create a bike with no numbers. Similarly, one can create a bike with bad numbers on one component and good numbers on another. (A stolen engine in a correctly titled frame is very likely to escape law enforcement’s eye.)

Let’s examine a situation I see commonly. Someone builds a cone-Shovel-powered chopper. The builder then incorrectly titles the bike to the engine (because they stuffed it into a frame with no numbers, and it’s not technically legal in that configuration). In some states, it’s totally possible (but not legal) to title a bike this way. The problem is that somewhere out in the world, that exact same VIN could be registered in a different state correctly, because that cone Shovel’s frame carried the same numbers in the proper location! Would I buy a bike like this? Only if I was parting it out. It’s not worth the hassle.