Blog - Latest News
You are here: Home1 / News2 / Legion Riders Made To Turn Vests Inside Out At Dave & Busters

KENTWOOD, Mich. (WOOD) — Victor Murdock wears his American Legion vest proudly, honoring his father, a U.S. Navy veteran, as a member of the Sons of The American Legion.

“It’s just a good group of guys that want to raise awareness for PTSD, fallen veterans, for the ones that didn’t come back, even for those who did come back and are dealing with situations they never got over,” explained Murdock, the assistant director of American Legion Post 179 in Grandville.

The vest is one way Murdock and other members convey their message. After all, they say, there are few things that define American pride more than the flag and the eagle featured on the vest.


“It says we believe in America. We believe in our troops. We support our veterans,” Murdock said.

So imagine his surprise when he and another Sons of The American Legion member were told the patches on their vests could be misconstrued as gang symbols.

It happened Saturday night at the Dave & Buster’s location on 28th Street across the from the Shops at CenterPoint. As the two men and their wives waited for a table, the manager informed them of a policy against motorcycle vests bearing patches and asked the men to turn their vests inside out.

They chose to leave instead.

“It’s ridiculous. I was blown away,” Murdock said. “Probably one of the first times in my life I noticed right off the bat I was being discriminated against. ”

Monday, the restaurant manager told 24 Hour News 8 that he wasn’t allowed to speak on camera, but his bosses at Dave & Buster’s corporate headquarters in Dallas confirmed the policy. 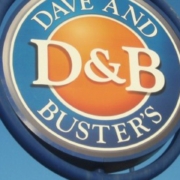