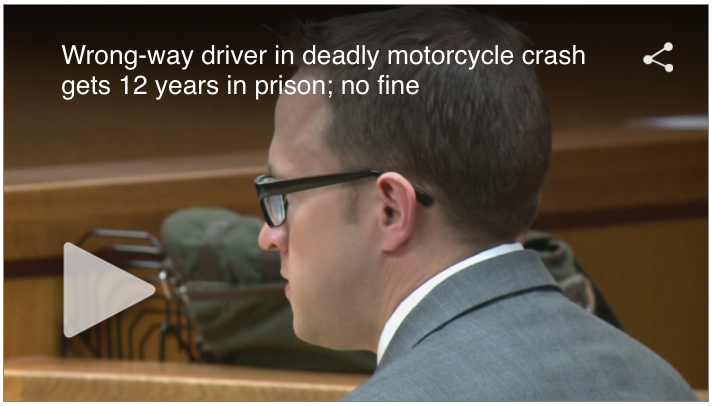 The driver who crashed into a motorcyclist while driving the wrong-way on Interstate 35 in 2015 has been sentenced to 12 years in prison. The motorcyclist, Domonick Turner, died in the crash.

John McClintock, 32, was charged with intoxication manslaughter after the crash in which he drove in the wrong direction for 11 miles north on I-35 from US 183 in Austin. Officers chased McClintock as he drove the wrong-way around 4 a.m., and jurors watched their dash cam video during the trial this week.

He will not have to pay a fine.

McClintock told police he had been drinking and singing karaoke with IRS coworkers before the crash. He also said he made a wrong turn when he was trying to drive home to San Marcos, before he crashed into 24-year-old Turner in Round Rock.

Turner, who served in the Army and completed two tours of duty in Afghanistan, was hit and killed on Veterans Day.

“He was a great man, he’ll never be able to have that joy of having children,” Turner’s father said after the crash.

Turner’s mother addressed McClintock in court, “When your time is served, you will go on with your life. You will. You will have children. Domonick will never have children. He will never buy that first house. Nothing. He’s gone. Because you decided that drinking and having fun was more important than anything else.”

According to police, McClintock’s alcohol consumption that night included five beers and three shots of whiskey between 10:30 p.m. and 12:30 a.m.