Since Kelsey left, I was hit with a cold, bad tooth that had to be pulled, and bad roads (that I rode before) plagued my ride from Santiago to Lima. On top of the Harley dealership in Santiago stated they could not fix the problem with my front gas tank. The problem I had was the gas was not going to the injectors 100{6afdcdf14f1f3d0d6d046bdd6bb6844d1d6f78a435ef85ae323b1d28ccc5d3f7} causing me to stall out immediately placed in first gear. They changed the filter in a guess that would be the fix. They never did a PSI check or inspect the rest of the gas pump assembly. They charged me for all the work and never fixed the main complaint. I then took it to Iron Horse Mechanics that previously fixed my 2013 Road King in 2015. They fixed the problem in less than a day VERY CHEAP! When in Santiago, Chile SCREW HARLEY and call Pierre @ Iron Horse Harley repairs.

My head was not in the game with the death of my father still fresh. I just had a molar pulled but Marco had this party with all the Harley Brothers organized. I did not want to since my body was asking for rest. I was glad I went because they really lifted my spirits and in the end 50 shots of Jack was ordered and we all did a cheers in my dad’s memory. The next day I regretted it because I got sick. I hardly drank that night so it must have been the cold weather with me in a tee shirt. I had a great time with friends meeting new folks like the President of the Familia MC, La Mafia MC, and the Banditos MC of Chile. All great guys that support my run to Alaska.

Now that my bike was working like a racehorse, I rode 700 miles in the cold with a cold coughing up green flem. I stayed two different nights before getting to Peru. I got caught up in northern Chile in some bad fog that was thick as cheesecake. I was told by Lorenzo and Marco Price that the indigenous call the fog “Camanchaca!”

The Internet search states that the “Coastal fog forms on Chile’s shores and then moves inland in the form of cloud banks. The locals call it “Camanchaca”. The fog is made up of minuscule drops of water which are so light that they do not fall as rain.”

Entering Peru, the Run Gets Real

I entered Peru and it was a mess at the immigration center with throngs of busses of people looking to get the same stamps in their passports that I wanted. Three busses of Peruvians got there minutes before me. By then the temps were up in the 70’s leaving things somewhat warm. Left my leather jacket tied to my Harley in eyesight. The Security Guard wanted to me to leave it far away from where I parked up close. I pushed back respectfully and we both agreed after 5-minutes by some yellow lines still within eyesight. 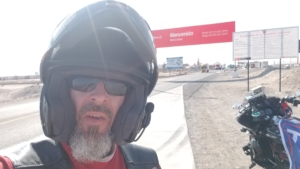 I stood in line for 30-minutes and when I got there the rude Peruvian Immigration officer that did not like my Cuban accented Spanish told me I needed a form. I went outside hauling my helmet and tank bag in tow. There was a guy who had a form for sale for $1,000 Chilean Pesos. It was either that or go to some cafeteria and pay $0.50 for the form there since they were NOT free.

After that I went to the Chilean side of Immigration that was in the same building but different door/room. After that I went around the corner to get the paper with the permission to allow my bike in the country. Now, with my $1,000 Chilean peso form I presented it to Customs official on my exit. They basically asked if I had fruits or veggies of which I replied in the negative. I was not searched and was allowed into the country of PERU! 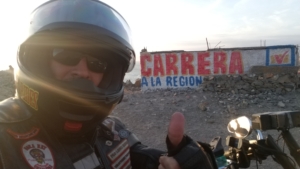 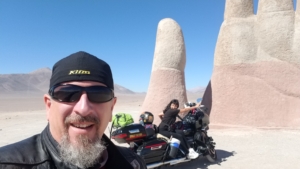 I was not into Peru but 20-miles when I was pulled over by Customs officials asking me for my “papers.” They searched my bike lightly going through the motions as if their bosses were watching to make things legit. This would be the first time I get questioned about my Cuban sounding Spanish Accent. They kept looking at my passport then looking at me asking if I was American. I was born in Hartford, Connecticut in 1964 so I guess that makes me a United States citizen with all the rights bestowed by the U.S. Constitution. I can’t help it if my parents made me bilingual. I must have been stopped like 5 times after that with the same issue……….only for the first two. After that I dropped my redneck dumb gringo horrible Spanish accent on them, and they just shrugged at the lack of communication and waved me off. I think I will play it by ear but play dumb gringo instead of my Cuban American self.

Roads to Ride and Die For

The roads of Peru are either super good or super bad. I ended up the 1S that is commonly known as the Pan American Highway up the pacific coast. I road the coast and the coastal mountains that make the Tennessee Tail of the Dragon blush. As I rode the coastal route of my trip the ocean waters crashing against the rocks kept stealing my attention from the road. Many of the roads here were very dangerous especially the devil’s curve as the news media coined it. A few busses of passengers had gone over causing the death of all on board. Some of the curves seemed as if I was doing a complete 180 degree turn with my floorboards scraping the road the whole time white knuckled.

There was a bad portion of about 40 miles of sand and rock road that was the detour for new road construction. That was hairy being so high up with no barrier from the fall downward off the berm. About halfway to Lima past the town of Camana the winds picked up the sand from dunes that reminded me of the Sahara Desert swirling to the point the road could not be seen. I did a video that you can see below as I tried to capture the sandstorm on my GoPro as I held it in my left hand as I rode. I felt as if I were sand blasted going down this forgotten beach town. On the most part there is gas in almost all this cities unlike Chile north.

I am now in Lima, Peru getting my gear washed and taking a day’s rest. Tomorrow is Thursday heading to the Peruvian Road of Death in the northern province. Please see the video below for hair curling and butt puckering roads. Tomorrow Kelsey and I ride 855 kilometers toward the deep back roads so there wont be any WiFi unless we find a good hotel. Wife really sucks outside the major cities due to the poor infrastructures. Until then please scroll down below and help me reach my fundraising goal benefiting the American Legion Post 180 located in Plantation, FL.

This is a Charity Run:
I will stop here and tell you more on my trip to Ushuaia, Argentina to Alaska, USA, but for now, I need to you donate some $$$$$$ for the American Legion (post 180). If you read my previous reports you know that I am riding for my local So Flo veterans through the American Legion (Post 180) located in Plantation, FL. The American Legion completes 100 years in service to our vets and their families. Post 180 does what they can to address the needs of our veterans within their reach in Broward County, FL. It is for this great cause that I am riding and asking you now to donate what you can. I generally ask for you all to donate a minimum of $20, but if God has blessed you donate more like $50 or $100! I ask you to donate what you can.

Riding the Deep Peruvian Culture and Mountains 2019
Scroll to top