After joining Kelsey in Lima, Peru we took one day to due wash our gear and get ready for the run. The morning we woke up the fog was thick from the view of our hotel room with the streets wet from the moisture. As we headed out of Lima, in the craziest driving environments in all Latin America, we stopped at a “Casa Cambio” to change some dollars for Peruvian Solars. 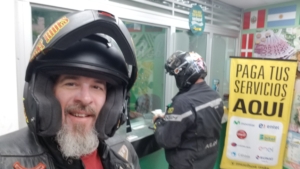 The ride through Lima to the edge of town where the Pan American Highway started was gruesome, but Kelsey and I plowed through that mess. We were briefly stopped by local motorcycle cops for riding the Expressway where bikes are not allowed. There were no signs and with some talking to and making them laugh with my stories in Spanish we were allowed to ride freely on the parallel street with the rest of the Chinese motorcycles.

Hitting the Pan Am Highway where the speeds were 100 kilometers, we set our speed at 80 MPH that shortly turned to 30 MPH due to the dense fog that was thicker than cheesecake. Kelsey dared and completed a video that I will try to steal off his Facebook page. Motorcycles in Peru don’t pay tolls and there is always a small path for motorcycle to pass on the far right hand side of the toll booth. As were trying to pull into our free pass zone there was about 40-police officers and vehicles to match.

As the police stopped us, they professionally asked us for our papers and passports that I eventually produced. I was ahead Kelsey about 2 bike lengths so one cop each. I never give my actual passport when asked I give them a copy of the passport. If they ask me I tell them I left it in the hotel safe by orders of the immigration folks at the border so it would not get stolen by thieves. Too many stories I have read about tourists being held hostage to pay a hefty fine to obtain their passports back. When I first entered the country, I knew to buy bike insurance at the Mapre office just outside the border station. Kelsey was not aware thus he did not have the proper paperwork to operate his vehicle in Peru. The officer that was doing the traffic check wanted to impound and tow Kelsey’s bike. When I told this to Kelsey his eyes turned into two big eggs and he said, What?” 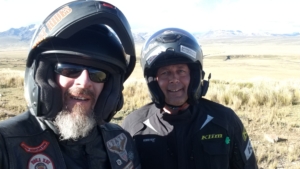 I put on my attorney hat and started representing my client’s best interest right there. The cop that had checked and cleared me was now standing next to me by Kelsey saying that it was his partner’s stop not his.

I turned to the menacing police officer and lied my ass off for Mr. Kelsey. I explained that we both entered the country together and that we both purchased insurance at the border, but Kelsey had lost his. That his tank bag was stolen the night before. I told the man with the power in his hands that he had the discretion to impound the vehicle if he really believed that the operator posed a threat to society – or – on the other hand since it is unlikely that a tourist riding a $50,000 (Peruvian cost), motorcycle would cause any harm to the public seeing he had $50,000 vehicle to lose. That he should give Kelsey a waiver to ride on and fix his papers. BAM……..they let him go, legal bill will be mailed June 1st.